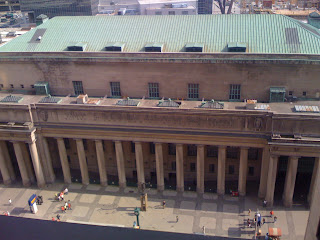 The picture above is of Union Station, taken from the window of our room at the Royal York. Not visible in the photograph, but in view just beyond the station, were Lake Ontario and the Toronto Islands.

Although we were not feeling at all hungry, we went to the Old Spaghetti Factory on The Esplanade in Toronto for dinner last night. When I was about Alex’s age, my Mom and Dad took me there for dinner, and we went more for old times’ sake than anything else. It had not changed at all, and is a great place for a tasty, filling, value for money meal. The décor is very retro, and reminiscent of a funfair, with tiffany lamps and the horses from a merry-go-round in the centre of the room, with tables scattered between them. It was lovely to go back again.

As we are flying out this evening, we arranged for a late checkout, and ordered breakfast to the room. As usual, we all had trouble sleeping the night before our flight, until about 7.30am when we all fell heavily asleep. Breakfast was scheduled to arrive at 9am, and when it did I awoke startled, tumbled out of bed in my pyjamas, hair askew, trying to maintain what little dignity I could in front of the immaculately dressed waiter. Breakfast was beautifully presented on a table which we simply pulled chairs up round. It hardly cost any more than the breakfast we had in the restaurant the day before. Why have I always worried about room service being expensive? In the grand scheme of things it is hardly ever any more expensive than a restaurant – and there is something quite bohemian about eating off china plates and silver cutlery in one’s pyjamas.

We took our time getting packed up and when we had no excuse to linger any further we headed off to see Casa Loma. Again, this was for old times’ sake. Mom, Dad and I had always talked about going and never did. I’m finally learning that you have to carpe diem and not leave things – or else you might never do them. I know for a fact neither Mom nor Dad every visited the castle. Mom was right when she said Casa Loma probably might not be that outstanding once you have seen all the castles that I have seen in England and Europe. Having said that, it was still a stunning property, especially considering that not only is it practically in the centre of Toronto, but there are ordinary houses just across the street. There was also a commercial being filmed so we had the added excitement of lights, cameras and people shouting “quiet please”, “ action” and “cut”! We hardly noticed that this meant there were a couple of rooms we could not see properly. I did enjoy the fact that the cost of the audio tour was included in your admission and that it was very entertaining. I particularly liked the conservatory and also Lady Pellatt’s bedroom suite. It was decorated in Wedgewood Blue – apparently Lady Pellatt’s favourite colour. It is mine as well.

After nipping back to the Royal York briefly to collect a mobile phone we had left behind, we headed towards the airport. As we were a bit early, we decided to go to a mall. Coincidentally, we chose Sherway Gardens, the mall that Mom and Dad took me to the day I left Canada, 13th March 1989 – because we were too early for my flight! I had not been back since, and it was quite emotional walking through it remembering that day. It is a lovely upmarket mall and we all enjoyed perusing the shops, although nothing was purchased. Eventually we headed off to the airport and the British Airways lounge.