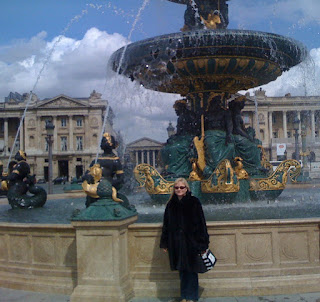 Our Eurostar train was not scheduled to leave until 5.43pm, so that left us with virtually a whole day in Paris on our own. We woke up to a hazy start on Sunday morning but the very air itself seemed full of excitement. We could hear the helicopters circling overhead, and when we turned on the television we found out it was the day of the Marathon de Paris. Thousands of runners were there from all over the world to race through the streets of this beautiful city. We decided on a slow start in view of this, and had a leisurely breakfast in the Cluib President restaurant before returning to our room and getting ready to check out.

The concierge at The Meridien agreed to keep our luggage for us so we could go sightseeing unimpeded, and we got out our metro passes for another day of exploration. As we walked to Porte Maillot metro station, we saw two little boys, their mother’s hand in one hand and flags in the other. The flats were inscribed with “courage Papa” and “allez Papa” and must have been encouragement for their father, a runner in the marathon. They disappeared into the metro station in front of us. As for us, we decided to start our sightseeing at the Traocadero. Most of the iconic photographs of the Eiffel Tower were taken from the Trocadero. and the view really is quite spectacular. The Trocadero itself is beautiful as well, with gold statues on each side and a landscaped park down from the huge steps. If you are hungry you can get a gauffre, or French waffle, to munch on whilst you gaze at Gustave Eiffel’s creation. They are always on sale from vendors at the Trocadero. Today, however, we were still full from breakfast, and our view of the tower was different than ever before as thousands of runners were pouring through the street between it and the Trocadero. It was just incredible. It did, however, mean there was no easy way across to the Eiffel Tower unless we wanted to run in front of the marathon runners which seemed a very unwise idea! So we decided to go back to the Champs Élysées. We got off the metro at FDR (Franklin Roosevelt) and walked down to the Jardins desTuileries. These beautiful gardens at the foot of the Champs Élysées are very near the Louvre. There are chairs in the gardens which you can sit in for free, if you can find one available. Two people left just at the right moment and Guy and I sank into the wooden deck chairs to watch the ducks on the pond. It was really idyllic, sitting there in the sunshine on a Sunday afternoon.
As we walked back through the Place de la Concorde, we stopped to take some photographs. I love the Place de la Concorde, which is ironic as I normally have a real aversion to places where awful events took place. But for some reason I find it very beautiful and manage to ignore the horrible history that took place there.

Our feet were rather sore, so we hopped back on the metro and stopped for a coffee in Fouquets. Our waiter was rather moody this time and I was disappointed, but that is a risk you take in Paris! The coffee was good, but when the bill is 16 Euro for a café crème and an orange presée, you expect the coffee to be good! Our experience on Saturday at Fouquets was much more memorable. By this time we needed to go back to the hotel to collect our luggage. As we had the day pass for the metro, we decided to be frugal (for the first time that weekend!) and take the metro to the Gare de Nord. It is not a difficult journey and it only took us about half an hour. The Eurostar terminal at the Gare du Nord is a bit confusing, and not nearly as nice as the facilities in England, but it was okay. We did a bit of shopping and chatted to a fellow traveller, who claimed that he had a shop just beside the Apple Store in Regent Street and commented that one of the gentlemen waiting near us was wearing one of his shirts. When we asked which shop he meant, the gentleman said “Ted Baker”. Whether he was the iconic gentleman himself is still unknown as I (probably rather annoyingly) refused to ask the question. I don’t know why I do that. It is not the first time I have met someone famous and not acknowledged their status. I like to think it gives them some modicum of privacy, but as said gentleman had virtually announced himself, perhaps he wanted to be recognised. In which case, if he was said gentleman, my sincere apologies to Mr Baker!

Our journey back on Eurostar was very nice, except I ended up sitting backwards which I really don’t like to do at speed – and believe me the Eurostar travels at speed – at least in France anyway. I also have to say, having chosen to travel Leisure Select class, that I would hate to travel standard class. Although the service and food – including the champagne–in Leisure Select are excellent and served to you at your seat, the seats, décor etc seem very tired. I suppose it is because they are well used. There is a class above Leisure Select called Business Premier and I am sure that is probably more salubrious in terms of accommodation. But as I say, the food and drink were excellent in leisure select so I do not like to complain!

We had a super journey, except for the bit back in London when our tube train was invaded by football or rugby fans (I’m still not sure which) bellowing and shouting and generally being very intimidating. I was relieved to arrive at Paddington, although unfortunately many of them got off with us. Luckily they were being cordoned into “holding areas” by the police to await their trains, so Guy and I were able to wait for our train in peace. Meanwhile, my mother in law had taken Alex to Dorking station and he was en route to Reading. By some amazing serendipity, we arrived in Reading on our train from Paddington only moments before Alex did, so we waited for him. I did a bit of a double take when he walked through the ticket barriers in his topcoat looking so very grown up! I must admit I really did miss him so I was very pleased indeed to see him. After hugs all round, we all hopped in a taxi and went home. A wonderful weekend was had by all.
Posted by April J Harris at 9:04 am