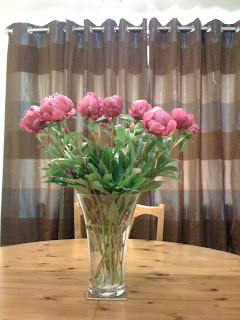 Suddenly this morning everyone is wearing coats again. Our weather is positively schizophrenic! It’s now only a very damp 15 degrees Celsius. I just pray that little blip of sunshine and heat was not the entire British summer! (Sadly, it has happened before.)

I bought some peonies today. They looked decidedly more summery than the weather, and they are my absolute favourite flower in the world. They look gorgeous sitting on the dining room table, all their billowy pinkness on show. I tried to establish some peonies in our garden in Derby and even after four years of trying the plants had still not taken properly and only gave the odd bloom. They were nothing like the peonies I remember in our garden on Krug Street in Kitchener when I was a little girl. There were at least four huge bushes in the garden along the fence on the left hand. They were planted by the people who lived in the house before we did. Every summer they would burst into bloom, dozens of flowers on each plant. It became a tradition that one day every summer my Mom and I would pick a huge bouquet of them and drive to the cemetery in Stoney Creek to lay them on my Grandma’s grave. The ones we took to my Grandma’s grave were the only ones we ever picked; Mom always left the rest on the bushes because she did not want to spoil how pretty they looked. I used to enjoy the journey to Stoney Creek with my Mom. I had never known my Grandma and although I missed having her in my life, the sorrow was not as acute as it would have been if I had known her. I understand now how hard it must have been for my Mom, as when we first started going my Grandmother – her mother – had been dead less than ten years. It must have been awfully painful for her. As for me, I always found the day kind of fun. I was amazed by the size of the big headstone with the family name carved in it (which did seem to get somehow smaller as I got older) and I liked walking through the old cemetery, looking at the graves of the people who had died so many years before, many of whom were related to me. Actually, today is one of those strange days where the present and the past seem to blend into each other, and I keep getting surprised by memories that pop into my head at the most importune moments. It’s nice in one way but dreadfully inconvenient in another as my eyes keep filling up at totally inappropriate times!

I have a pimple on my cheek so big it needs its own postcode. I’ve covered it with concealer but of course you can still see it. My skin has been fantastic for months on end, even through the really stressful times, and then suddenly I’ve had three pimples in the last two weeks. I think it is grossly unfair that a face that has fine lines (okay maybe even a few wrinkles) should also have pimples. It just isn’t right. The idea that my face is going through a second adolescence when I am practically middle aged (okay probably a bit more actually than practically) is quite alarming. I hope the hormonal temper tantrum taking place on my face settles down soon!
Posted by April J Harris at 4:50 pm