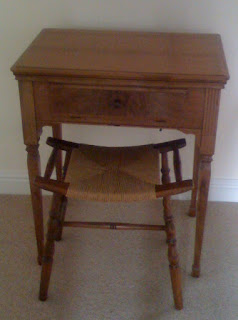 I’m eating my breakfast as I write. It’s tea and toast, which is, I think, one of the most comforting things in the world. As a nod to my health conscious side, the toast is made from soya and linseed bread (which is quite wonderful with orange blossom honey) and the tea I’m drinking is Assam, so this is comfort food with twist. But I’m loving every bite.

Like most of my weeks, this one has started out busy and promises to continue in the same vein. Monday was taken up with a personal training session, a visit from the decorator to hang new curtains in the library, and lots of tidying - which seems to have had absolutely no effect whatsoever. I also had to get things ready for the 21st Century Husband’s business trip. The only thing not so quite 21st Century about my aforementioned husband is that he doesn’t do packing – except of computers and electronic items! But that is another story. Yesterday was Pilates, more tidying, one on one yoga class, more tidying, ferrying the 21st Century teenager to music lessons and band, ironing, and writing. Oh, and about an hour spent studying the arrangement of the furniture in the library and realising that if I want to show the new curtains to best advantage I need to move most of the furniture in the room (including bookshelves which is going to take ages as they are absolutely full of books). This also involved running round with a tape measure as one piece of furniture needs to be placed elsewhere in the house. I now know where it is going, but not quite how it is going to get there as it is a very heavy antique sewing machine. It’s beautiful, and I learned to sew on it (it was antique when I learned on it, so no comments please!) and as it belonged to both my grandmother and my mother it is incredibly cherished. You cannot even see it is a sewing machine when you look at it as the machinery part (which is very beautiful in its own right) is enclosed in a gorgeous wooden case that looks like a table. I have always wanted a dressing table with a stool to sit on and realised yesterday that my sewing machine was perfect for this as it is, after all, a table in appearance, and it has a matching stool (of a different origin and vintage but never mind!) tucked underneath it. It’s like the poor man who went searching for his fortune when he lived on an acre of diamonds – my dressing table has been under my nose for over a year. I am disproportionately pleased by this discovery and cannot wait to move it into my bedroom. 21st Century Husband won’t recognise the place when he gets home tomorrow. (You can see my beautiful sewing machine – I mean dressing table – above.)

I am also finding myself – very reluctantly – starting plans for Christmas! I’m currently investigating personalised Christmas cards (and have narrowed it down to two choices), finalising my gift list, and I find that I have also managed to plan much the season already. I have had invitations both for Christmas and Boxing Day and we’ve already booked Alex’s 16th birthday treat – a trip to New York over New Year and his birthday – thank goodness for air miles! I’m actually having trouble finding a date for the cocktail party we had hoped to have for our neighbours, living here as we have for nearly a year, and aside from to say hello to, hardly knowing a soul in the surrounding houses.

So it has been an incredibly busy week so far. I’m hoping to get out for a run later, if the rain holds off – but I need to wait until about ten o’clock, so that the school run crowds have disappeared, and the lunchtime rush has not yet begun. I get very nervous when I’m out running - certain as I am that everyone is looking at me saying “what on earth is that incredibly unfit woman doing out running?”. Of course months of personal training, Pilates and yoga have ensured that I am not unfit. And as a well proportioned size 12, I don’t look too bad in my running gear either, but inside my head I am the Michelin Man. Yes folks, distorted body image is my middle name.

Oh, and I think I may need to investigate a new washing machines. Mine has been acting a bit off colour for ages, and suddenly it’s making some very dodgy noises. In fact, you’ll have to excuse me while I go and check it out – it sounds like it might be about to come visit me in here from the next room. Or is that the dryer? Neither one of them were very happy about moving and time has not improved their condition. No rest for the wicked!