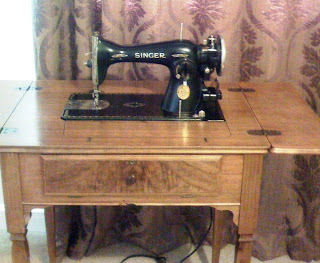 After Wednesday’s entry, I received five emails asking me what the sewing machine part of my “dressing table” looked like. To those five readers, it was very nice of you to ask, and please see the photograph above. The sewing machine is circa 1920 – 1930, I’m not entirely sure, but based on stories my Mom told me, that is my guess. I do love receiving your emails, so please do get in touch. The address is april@21stcenturyhousewife.com .

The week is finishing as it began – very busily! My sewing machine / dressing table is now comfortably placed in my room and looks quite nice there. It’s such a pretty piece of furniture it is nice to have it in a place where I can see it properly. I have been sorting, de-clutter, tidying and cleaning nearly non stop, but sadly unless you saw everything to start with the change is not yet all that noticeable! I can see progress though, and that makes me very happy indeed.

In many ways, it has been a wonderful week. I had not less than three major prayers answered which makes me feel incredibly grateful and happy. Gratitude has been a major theme in my life this week actually. Funnily enough, I was listening to a podcast while I was running on Wednesday about gratitude. Oprah Winfrey was interviewing Sarah Ban Breathnach on her Soul Series and their discussion was fascinating. It involved the principle of keeping a Gratitude Journal, in which you list five things that you are grateful for every night. Sarah discusses it at length in her wonderful book “Simple Abundance”, which is a real pleasure to read and which I highly recommend. I got to thinking about things I was grateful for and there really were an awful lot of them! Even silly little things like a chance encounter with a herd of cows on my way back from my run.

You see, part of my run takes me through a field. I run on the Thames Path, a very long (184 miles!) path that runs from the Cotswolds right through to London. Needless to say, I run on only a very small part of said path! Anyway, the path cuts through a number of fields, and this field is located just between the Mapleduram Locks and the first bit of road in Purley on Thames. There is another field adjoining it, and they are divided by a hedge. The hedge has a gap in it that the cows come through when they wish to change fields. (I don’t know why they do it, but never mind!) So on Wednesday, as I was running across the field, I saw the first of a line of cows coming through the hedge. They were coming through single file in a very orderly fashion, but there was no human to be seen. I was not unduly alarmed as I’ve crossed in the middle of these cows before (albeit when they were grazing) and never had any problems. As I got closer, I watched as the cows continued to walk unhurriedly, single file, from one field to the other. They did seem to look at me curiously – kind of like, what the heck are you running for? So I decided to slow down and walk for a bit. I must admit, I was beginning to wonder what would happen next, but I decided to trust and just carry on. When I got to the point where I had to cross the line of cows, a large black cow stopped and looked at me. I stopped too and thought for a moment about what to do. I felt a tiny bit frightened as this was one huge cow (it may even have been a bull, but being a city girl, I’ve no idea). After a minute of regarding each other curiously – and I have to say I have never been so close to a cow before in my life – I simply said “Good morning” and “Excuse me” as I walked in front of the animal. She (he?) watched me pass and then carried on as if I had never been there. I turned and watched this parade of livestock for a minute or two, and was delighted to see that, at the end of their parade, walked three tiny calves. I still was not far away from the group and felt really privileged to be able to be so close to animals I had hitherto been kind of frightened of. This brought to mind gratitude again, not just for the experience, but for the fact that we live where we do, I am fit enough to run, it was a sunny day, and on and on from there. It’s kind of addictive, this gratitude thing.

I encourage you to read more about Gratitude. Check out Oprah Winfrey’s website, Sarah Ban Breathnach’s website, or get a copy of Simple Abundance from your nearest bookstore or on Amazon.

Have a wonderful weekend. I’m off with the 21st Century Husband and Teenager to visit Clarence House in London, the former home of Her Royal Highness The Queen Mother, and now the official residence of HRH Prince Charles and family. This property has never been open to the public before, but the reception rooms are open in September this year, so we are very interested to see it. Anyway, a day out in London will be fun, especially this time of year.
Posted by April J Harris at 4:45 pm