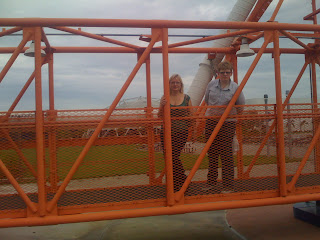 You may wonder what on earth the photograph is of. You can only see part of it in the photo, but that is the gantry that Neil Armstrong, Buzz Aldrin and Michael Collins walked down to get to Apollo 11, the first manned mission to land on the moon. It’s at Kennedy Space Centre in their Rocket Garden now, and you can walk in their footsteps, imagining what it felt like, wondering if that was the last earthly surface they’d ever walk upon, not knowing if, or how, they were going to change the world. Not only did they make it, but now, thanks to them, we have made huge advances in the fields of medicine, technology and other fields they could only even dream about. I watched them walk down that gantry when I was just four years old, as we watched Apollo 11 blast off. My Dad was absolutely crazy about space exploration and he passed that enthusiasm on to me. I remember Dad saying they would have eaten steak and eggs before blast off which I thought was unbelievably exotic, and I remember dear old Walter Cronkite reporting. I never realised the gantry was red, I thought it was black, but then we had a black and white television in those days. A few days later, I watched Armstrong and Aldrin walk on the moon. It was late, and I kept falling asleep, but Mom and Dad kept waking me back up. I think it is the only time they ever did that – most other times they were trying to get me to sleep!

The other thing that was amazing at Kennedy was the Mission Control display. It was the actual room, including the very computers and chairs (even a jacket worn by a team member thrown over a chair) used in the launch the Apollo missions. Accompanied by a video of what happened in the room during a launch, it was so evocative, it was like stepping back in time. Much to Alexander’s disgust (“oh, Mum!”), it actually brought tears to my eyes, so utterly did it remind me of those early mornings spent watching the countdown, eating breakfast on TV tables in front of the television on Krug Street with my parents.

You may wonder where on earth I am going with this. Trust me, I do have a point.

And that is - we all have the potential to be Neil Armstrongs and Buzz Aldrins in our own way. Most of us are not going to take steps as big or as publicly as theirs, and certainly not as dangerous as theirs, but we all take huge steps in our own way during our lives. Whether it is immigrating, moving a large distance, getting married, having kids or putting your life back together after it has fallen apart, everyone has the opportunity to step up for themselves and triumph. And walking down that gantry reminded me that we can. With a bit of faith, and a lot of courage, we can change our lives and the world, if that is what we want to do.

And it reminded me that almost anything is possible. If, on that July morning in 1969, you had said to the four year old me that one day I’d walk down the very gantry I was watching those astronauts walk down, I’d probably have laughed at you. I’d also have been incredulous if you said I’d immigrate to England when I was 23, find my very own Prince Charming and raise a family with him, travel as much and fulfil as many of my dreams as I have. But making your dreams come true is one of the most important things you can do for yourself. So whatever it is - swimming with dolphins, eating dinner at the top of the Eiffel Tower, Afternoon Tea at the Ritz, going to Disney or travelling round the world, take just one step today to put you a step closer to it. Like they say, carpe diem – seize the day. I hate it when people say “someday”. The last time I said it was in the context of “yes, Alex, someday we will fly on Concorde.” Two months later, Concorde was decommissioned. I’ve never been allowed to forget it.

Take “one small step” (my apologies to Mr Armstrong) – start a savings account, make one phone call, even actually book a long dreamed of trip – and it can start the ball rolling on some great adventures. Just remember, every great adventure I have had has involved careful planning. Don’t leap off into the unknown without thinking and planning or you could be hugely disappointed. One step at a time. And don’t think you have to go a long way away to make your dreams come true. Just for the record, some of my greatest adventures have happened really close to home.
Posted by April J Harris at 6:13 pm