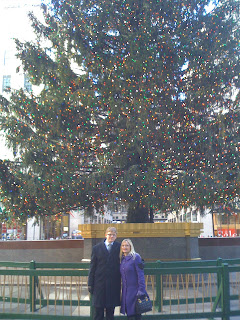 We started the day with breakfast at Starbuck’s again. Having given up caffeine, I had my second latte in two days. I think I might be letting myself down a bit, but it tastes so good I just don’t care!

We headed off to Macy’s. The shopping was great. Not only are their sales amazing, but it is easy for all of us to find things that fit. We had great salespeople as well, and once one of the chaps knew Guy and Alex’s size, he found us some bargains that were really quite incredible. The only thing I don’t like about Macy’s New York is that although it is beautiful on the surface, with amazing Christmas decorations, the actual store is very old, and beginning to fall apart. In particular, the ladies’ rooms are just awful, and I’m told the gents is not much better. At Saks Fifth Avenue, the ladies’ rooms are positively luxurious, but at Macy’s, you would just rather not be in them. It’s a shame. The ladies’ rooms in Macy’s San Francisco are beautiful. It kind of spoils the whole shopping experience. But we really did well on the bargains so it was worth it.

After a brief stop back at the hotel, we headed to Rockefeller Centre as we had a tour of the NBC studios at 5.30pm. The taxi driver laughed at us as we were taking a taxi only two blocks – I had not realised how close the Waldorf was to Rockefeller Centre. On the plus side, the taxi driver pointed out St Patrick’s Cathedral to us, and suggested we might like to have a look around. We had time before our tour, and I’m so glad we took his advice. It is a beautiful cathedral, and as we always do, we lit a candle at the chapel of St Joseph, the patron saint of my Mom’s dear friend Jenny, who was always like a second mom to me. Ever since she died, I have lit candles all over the world for her – now I light them for her and for Mom and Dad as well. I’m not a Roman Catholic, but some of their traditions are very comforting, and at the end of the day we all believe in the same God.

It was soon time for our tour, which was very enjoyable. We had toured the NBC studios on our last visit to New York a couple of years ago, but this tour was different enough that we all still found it very interesting indeed. I was thrilled to get to sit in the Saturday Night Live studios (last time they were setting up for a show and we had to peer through the windows). I have always loved Saturday Night Live - particularly back in the days of the Not Yet Ready for Prime Time Players!

When we came out it was dark, and the decorations at Rockefeller Centre looked amazing (the 21st Century Teenager and I are pictured by the huge Christmas tree above), as did the stars all over the front of Saks Fifth Avenue. There is a TGI Fridays just opposite from Saks and we had a super meal there, eating far too much and enjoying every bite. Following the advice of our taxi driver from earlier, we walked back to the Waldorf and had a nice drink in Sir Harry’s bar before we headed upstairs to bed. It’s been another super day in New York City.
Posted by April J Harris at 2:18 pm