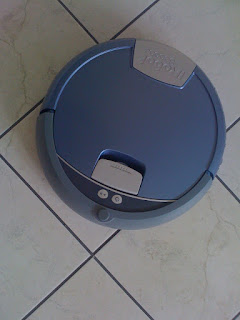 Remember the Jetsons? It was an old cartoon series that featured a family who lived in the future. They lived exactly as the writers in the 1960’s (and later in the 1980’s when new episodes of the series were made) thought people in the future would live. The father, George, worked three days a week at Spacely Sprockets. His wife, Jane, was a housewife and they had two children, Judy and Elroy. They also had a fantastic robot maid named Rosie. Aside from the few times that she broke down with disastrous consequences, Rosie was an amazing asset to the household and as far as I can gather did pretty much everything around the house. Let’s put it this way, I never saw Jane with a vacuum cleaner in her hand! I thought Rosie was wonderful and when I was first a housewife I always joked that I’d love to have a Rosie round the house. Well, believe it or not, I now have two – except their names are not Rosie and they don’t look anything like her.

The one you see above is my newest acquisition. He’s called Scooba. He cleans hard floors independently. This makes me incredibly happy as the job I hate most round the house (next to cleaning toilets) is washing the kitchen floor. Now Scooba does it for me. All I do is fill him with water and a bit of white vinegar, press a button and he’s off. He beeps when he has finished and then all I have to do is empty the dirty water chamber, give the whole thing a rinse and plug him back in to charge. My kitchen floor is left sparkling clean with virtually no effort and no chemicals.

I also have another robotic cleaner which looks remarkably like the one at left with just some slight structural differences as he does not have to hold water. Oh, and he is silver instead of blue. He’s called Roomba. He is actually my second Roomba. The first one came into our lives about three years ago, purchased at an “Ideal Homes” show. I must admit I had my doubts when we first purchased him, wondering how it was possible that a small robotic device could actually vacuum for me. The 21st Century Husband and Teenager were not to be deterred however, fascinated as they were by this piece of technology. Well, I’m incredibly grateful they insisted because he was one of the best purchases we ever made. He is unfortunately deceased, having worked himself quite literally to death over a period of three years. It was the flat we stayed in while waiting for this house to be built that killed him. It appeared to be clean, so I set him to work just to maintain the standard. Turns out the carpet had never been vacuumed properly and he choked to death on the build up of new carpet fibres. It was rather sad really. You shouldn’t use Roombas on brand new carpets. They can’t cope, bless them. My new Roomba is the next generation and, although I hate to be disloyal to the memory of our first Roomba, he is a bit more advanced than the previous model we had. He works a lot like Scooba, except on carpet instead of hard floors. Instead of just a plug, he has his own charging dock which he can actually locate for himself when he needs a bit more juice provided he is on the same level of the house. The only thing he cannot do is the stairs (he has no legs, but then neither did Rosie!) but he can clean the landing upstairs as he senses the abyss of stairs below him and stays away from the edge. It amazes me every time I see him do it. All I have to do is press a button to get him going and then empty the dirt chamber and clean his brushes between rooms.

Of course, you still need a traditional vacuum cleaner for heavy cleaning, and also for furniture and to get into those pesky edges. Roomba is more of a day to day tool to keep things up to a good standard. But it is nice having these robots round the house. Used properly they can keep your floors clean virtually all the time. Due to my hatred of the dreaded task, My kitchen floor used to get washed once a week if it was lucky. Now it gets washed and sterilised every couple of days, with virtually zero effort on my part.

I feel very Judy Jetson-esque as I watch my little buddies racing round the house. I’ve even been known to talk to them, which does worry me at times. But as they talk as well I can’t see that it is that bad. Every once in a while there is a little mechanical “oh oh” sound if one of them is stuck or needs a bit of extra help. Roomba even speaks to me if his brushes are dirty. He has a woman’s voice though and she tells me in five different languages – which by the time you get to the third one is a bit annoying. I don’t know how he can have a woman’s voice – despite my memory of Rosie, these little robots have always seemed very male to me. I have no idea why but they do – as you can tell by my constant reference to them as “he”.

I often wonder what the housewives of days gone by would make of these space age additions to my household. When I think of what it was like to clean when I was little (not that I did much of that, but I watched my Mom!), it seems almost too futuristic to be true. I have to say that I can’t recommend them highly enough. You do have to keep the dirt chambers empty and perform a little routine maintenance, but it is no effort compared to what you would have to do if they were not there. They have absolutely changed my life. In fact, I’m hoping to add to our robot family with another Roomba for upstairs so that I can have them all going at once. Now if I could just find a robot to clean the toilets….

(If you would like a Roomba or Scooba of your own – or even a little robot family – go can to the Domotec website. Just click here to have a look.)
Posted by April J Harris at 3:36 pm