Being Flexible with Tradition 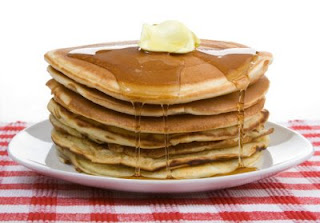 Tuesday this week was Shrove Tuesday, the last day before the beginning of Lent. Historically Christians gave up meat, fish, eggs and milk for the forty days of Lent, to remember the time Jesus spent fasting and praying in the wilderness before he was crucified. (Not many Christians eschew all those foods during Lent now, although many still choose to give up something in the hopes it will help them to focus more on God.) The tradition of eating pancakes on Shrove Tuesday arose out of the fact that wasting is a sin, and all those foods being given up for Lent would need to be eaten before it began. Well, one of the best ways to use up eggs and milk is pancakes, hence the development of Pancake Tuesday - something that is now celebrated by Christians and non-Christians alike.

When I was a little girl, the local church would have a pancake supper on Shrove Tuesday and my parents and I would go there every year. It’s one of my earliest memories. But as I grew older, life got busier and often Shrove Tuesday passed without pancakes. So I re-instituted the tradition when my son was born. I got pretty stuck on the idea that pancakes were for breakfast though, which made it very hard to keep the tradition on busy mornings. We get up very early during the week, and I don’t know about you, but making pancakes at six am is not my idea of fun! So once again, the tradition got sidelined.

Finally this year I realised that there was no reason we could not have a pancake supper like the ones I remembered from my childhood. Pancakes are really not difficult to make even if, as I was on Tuesday, you are catering for different people at different times. The pancake mixture is easily made up and stored in the fridge for an hour or so. As it was our main meal of the day, I also served bacon.

Even though I live in England, it is the North American style pancakes I remember from my childhood that I like to make for Shrove Tuesday. (In fact, it is this sort of pancakes I make nearly all the time.) English pancakes are more like crêpes in my opinion and whilst I love them as a dessert (particularly the 21st Century Husband’s Crêpes Suzette), I don’t think of them as proper Shrove Tuesday pancakes.

Last year when we were visiting my cousin Esther, she gave me a marvelous pancake recipe. I always used Bisquick or pancake mix in the past, but not anymore! Esther’s recipe is the most delicious I have ever tasted. It also works very well if you want to make the pancakes in batches to serve all at once, keeping them warm in the oven. Some pancakes wilt under these conditions, but not Esther’s.

In a large bowl, mix together the dry ingredients. In a separate bowl, combine the eggs, sour cream, milk, and melted butter. Add all at once to the dry ingredients, stirring just until combined. Cook on a hot, lightly greased griddle or in a frying pan.