Here I Am Once Again 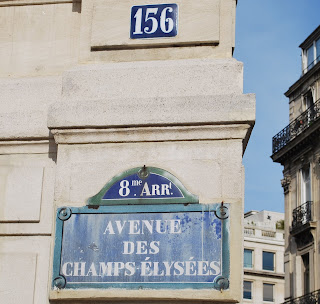 Once upon a time, a long time ago, there was a sixteen year old girl who dreamed of becoming a translator. She was studying four languages in high school and her favourite was French. When the opportunity arose for her to travel to Paris on a school trip, she leapt at it. At first, her parents said no, but then they relented, and she found herself traveling to the City of Light with a group of other students one rainy Saturday morning in the early 1980’s.

In the week she spent there, the girl fell in love with Paris. From the Eiffel Tower rising up above the Champs de Mars, to the Tuilleries with their fountains and gardens, to the Arc de Triomph sitting resplendent at the top of the Champs Elysees, everything seemed magical to her. The cobbled streets entranced her, the people - especially the fashionable ladies along the Avenue Montaigne - fascinated her, and the food dazzled her taste buds. It was such a city of contrasts - the beautiful and the ugly, the rich and the poor, the old and the new juxtaposed everywhere. She was besotted.

This was the girl’s first trip outside of North America, and at the time foreign travel seemed such an expensive luxury that she worried she might never return to the City of Light. The thought made her incredibly sad. And so, as she sat on the bus the morning the left the city on the way to the airport, she prayed fervently that God might let her return just once more to this amazing place - this Paris she had fallen in love with.

No, I never became a translator but yes, the girl was me. Life took me in a different direction but I am very happy that it did. The way the prayer was answered never fails to make me stop and be thankful every time I arrive in this magical place. You see, I cannot even be sure now how many times I have returned to Paris. I remember the first time was in the late 1980’s but since then I have come here at least once a year. So that would make this roughly my twenty-first visit here. God is amazing.
Posted by April J Harris at 4:41 pm