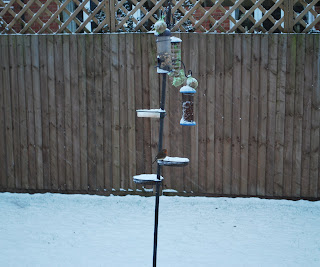 Once again this morning we awoke to snow, and once again schools and businesses were closed and roads were impassable. As you can see from the photograph, it doesn’t take much snow to make things grind to a halt here in England. Frankly, it is becoming embarrassing.

The amount of snow you see above made roads in Berkshire nearly impassable as council official were “caught unaware” and did not send the gritting trucks out soon enough. By the time they were sent out it was far too late and roads were frozen and dangerous. Caught unaware? They have been saying it was going to snow on Thursday for the last three days! I wonder if the dwindling supplies of salt had anything to do with their decision to delay sending out the gritting trucks?

Monday’s snowstorm was dreadful, and it was understandable that people would find it nearly impossible to get to work. But even after things improved on Tuesday, a huge number of people stayed home. Then when we got hit again on Wednesday, they were forced to stay home again. And then it snowed again today.

Of course, those people who can work from home are in a much better position than those who cannot, but on Monday the eagerness of some of those who could not work from home to look on it as a day off has amazed me. While my husband worked incredibly hard from home (putting in over fourteen hours in total), I watched others outside playing in the snow on the news. Yesterday, the only day this week my son’s school has been open, before the snow had even fallen, many teachers were telling students to “expect a snow day” today. In the event, it did snow and the roads were terrible, but people seem to be hoping for more so they can just stay home.

To be fair, some areas of the UK were really dumped on, getting up to 25 centimeters of snow. Yet even those areas where only a few centimeters fell were rendered impotent by the sheer lack of provision for something as simple as a snowstorm.

What makes it worse is that many folks here just simply do not know how to drive in the snow due to lack of experience. And to be fair, when would they get that experience? This is the worst snow we’ve had in eighteen years. But this inexperience made the roads even more dangerous than they were rendered by the inclement weather. Many people were driving too fast and simply did not know how to regain control of their cars when they skidded. When I ventured out today I saw many cars with snow still sitting on their roofs because people had not bothered to clean them properly. That is a hugely dangerous thing to do as the snow can slide down the windscreen and blind you or fall off and hit another car. On Tuesday my husband’s windscreen was hit by a huge chunk of snow and ice falling off a truck as he drove down the M4 on his way to work. So many of the things that are simply common sense to someone who is used to snow don’t even occur to many folks here.

I have been saddened by the way Britain seems to have simply given up this week. In a way, the total lack of preparedness for this sort of event has almost forced us to. Unfortunately, a quick Google search of the world’s press does not show us in a very favourable light. Time magazine reported that “Britain’s international humiliation was complete” when the Prime Minister was diverted towards answering questions about the snow during a joint press conference with the Chinese Premier. Papers from Australia to Toronto to Germany are making fun of us. Our excuse seems to be that this volume of snow falls so rarely it is not worth being prepared for it. Well the amount of money lost by businesses here in just a few days would pay for a lot of snowplows and grit. Even if we did not use them every year, just one repeat of this event would make them pay for themselves.

There is definitely a lesson to be learned from this experience, and despite the protests of those in government I think it might be that a bit of investment in the country’s infrastructure would not go amiss. If we have plans for disasters (and I do hope we have!) then why not a plan for what we do in the event of “extreme weather”? (And I don’t mean the one we seem to have adopted this time of just curling back up under the duvet.) Climate change is now becoming an undeniable reality - and it is not just global warming that is a problem. Winters are getting colder and even Canada had more snow than usual this year. Should we not take this as a sign that perhaps storms like this may become a more frequent occurrence in the future?

As more snow is forecast for Friday and next week, something will have to be done to keep our country moving. The situation is very worrying, with supplies of grit at critically low levels and worries for the safety of the traveling public at an all time high. No one wants to see people getting hurt struggling in to work, but we have to keep the country going, particularly in these days of economic downturn. Furthermore, what message does this send to our children as schools are closed day after day?

I’ll be watching the developments of tomorrow and next week with interest and hoping that it won’t be long before the UK will be back to business as usual. Because if we are not, I’m seriously concerned about the consequences to businesses and private citizens alike.
Posted by April J Harris at 6:46 pm