When The Going Gets Tough, the Tough Get....Baking? 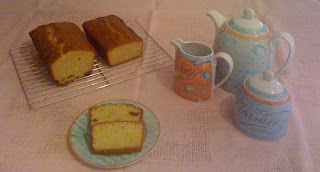 I’ve been snowed in this week by the worst weather Britain has had in eighteen years. This is not a problem in the 21st Century Housewife’s Kitchen. My store cupboards, fridge and freezer are always full. I grew up in Canada and rough weather was never a surprise during the winter months, so as a result I learned very early on that it is good to keep your larder full. It avoids having to go out in awful weather, and means that you are never without the things you need to feed your family – not just adequately, but well.

I did find that by Wednesday I was beginning to run out of original ideas for meals and I battled my way out to the supermarket, where I found a lot of other people also stocking up against the storms. I left with a full trolley, and everyone else must reckon this weather is going to last a long time, because I saw people leaving with enough provisions for several winters, not just a few weeks of snow. Perhaps they have very large families. Having said that, since the rationing of the Second World War, the British response to virtually any crisis is to stock up the larder. Shortages were so acute during that war that the fear of them happening again for any reason whatsoever has permeated its way through generations of Britains. Even now, over sixty years later, any disaster, real or imagined, results in a run on the shops and sometimes, even shortages of things like milk and bread.

But the most embarrassing part of this particular crisis in the United Kingdom is that we have been snowed in not by feet of snow but, in most places, by less than a foot. Even more cringe worthy is the fact that here in West Berkshire where I live, we have been snowed in by even less than that. This is not because we are lacking in back bone, but rather because we are woefully unprepared as a nation for weather of this type. Actually, we are rarely prepared for any weather. We discuss it constantly, but this is a country that seems to consistently receive the “wrong kind” of snow or rain, causing huge problems with transport. Similarly the use of air conditioning in private homes and even public buildings if rare (it has only just been made a standard feature on most cars in the last five years) because, it is maintained, it is only warm for a few months each year so a few weeks of comfort are just not worth the investment. So it is no surprise that as we only get heavy snow once every few decades, it is believed that we have no need to invest in enough snow plows and even the adequate supplies of salt and grit that could get us through a crisis like this. And it is the latter that has caused all the problems this time. Our city councils are running out of salt and grit, and have had to ration it to only the major roads. They have delayed sending out the gritting trucks until the last minute on many occasions in the hope of saving the salt and as a result many schools have been closed for four days this week, people are unable to get into work and the country has, if not ground to a halt, considerably slowed down.

As someone who grew up in Canada, I find it very embarrassing to admit I have been snowed in by such a tiny amount of the white stuff. But although I have walked through blizzards in my time, I am hardly encouraged to venture out as I watch cars slipping and sliding all over the roads on the evening news and hear about accidents and people getting stranded. So this has been a week for turning inwards. The 21st Century Husband is able to work from home part of this week, and indeed has been doing so. This week he has put in over sixty hours as our home became a satellite office. The two hours he has not had to use to commute (and it would have taken a lot longer than that in this weather if it were possible to get in at all) have been used for work, video conferences and yet more work. The 21st Century Teenager has been struggling to keep up with his schoolwork without the benefit of any teacher contribution, a challenge in this very important last year of senior school before sixth form. And I have carried on as usual, with the exception of the fact that every appointment I had this week, bar one, has been cancelled.

Strangely enough, I have often found myself in the kitchen. I have been baking more this week than I have in several months, and at the moment the second of two cakes is finishing baking in the oven. Baking is something I have always loved, partly because I love pleasing others with tempting treats and partly because I love those same treats just as much myself, but it is not something I do that often due to a lack of time. Baking is so much fun for me it feels like an indulgence, even though as someone who writes about food and lifestyle I could easily get away with classifying it as work.

As I thought about it, I began to remember that baking was something I often did with my Mom on snow days when I was a little girl. While blizzards raged outside, we’d turn on the oven and mix up something yummy. It was usually cookies as I recall, often my Grandma’s handwritten recipe for something called Bachelor Buttons, which regrettably seems to have been lost. (The recipe was easily sourced on the Internet, but the handwritten copy is not so easily replaced.) I remember the warmth of the kitchen, the delicious smells emanating from the oven and the cold feeling of my nose and hands pressing up against the small square windows that decorated our front door as I waited for my Dad to get home out of the storm so he could taste our baking.

So maybe that is why, during this week when the familiar has shifted and the entire nation has found itself held hostage to capricious weather systems and a lack of forward planning, I have sought comfort in the warmth and familiarity of my kitchen. I’ve cooked and baked in a lot of kitchens over the years, but many of the things that surround me in my kitchen today are from the kitchen I baked in all those years ago. And I still get the same feeling of satisfaction when I can offer someone cold and hungry a nice cup of tea and something delicious to eat that I did when my Mom and I would serve tea and cookies to my Dad when he got home.

There is a huge pleasure in providing not just sustenance but nourishment and warmth for our families and one of the easiest ways to do that is through baking. I find it tremendously comforting. At least it takes a bit of the sting out of the embarrassment of being snowed in by hardly any snow at all!
Posted by April J Harris at 3:35 pm