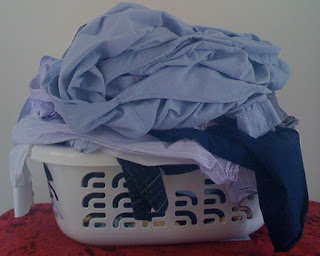 The first time I really ironed something was actually just after I met my husband. He had just collected me from work and brought me to his flat to get ready to go out for the evening. He asked me to iron him a shirt while he had a shower. I agreed without hesitation.

Now up until this point the only ironing I had done was as a kid, “helping” my Mom by ironing my Dad’s handkerchiefs. This was easy as they were squares, and back when men were carrying handkerchiefs in the 1970’s, it was the fashion to press creases into them as you ironed and folded them. I had never ironed a shirt before and had absolutely no idea where to start. So as my love made his way into the shower, I began to panic. What if this was some kind of test? His mum was pretty traditional. What if he expected me to be that way too? What if I could not iron the shirt properly and he decided to break up with me because of it? Well, panic must have fed inspiration because I did a pretty good job of that shirt in the end. In fact, when he told his mum about it later in the week, the 21st Century Husband-to-be was pretty impressed. His mum just shook her head, smiled and said to me, “Really, you should have started as you meant to go on.” I was puzzled at the time but later realised that what she meant by that was that by ironing that first shirt I was setting a precedent. She was right.

Not a lot of my own clothes needed ironing, and I was amazed to discover that most folks in England ironed everything. Seriously, one of my friends ironed underpants! Coming as I did from North America, the land of permanent press sheets and no-iron shirts, I was a bit overwhelmed. Most people living in England twenty years ago did not even have tumble-dryers (again a bit of a surprise to me) and that made ironing just about everything a virtual necessity.

Once I became a housewife, it did not take me long to discover that I hated ironing. From the endless shirts to the wretched sheets (which I always managed to tangle myself up in), my iron and I never quite developed an entente cordiale. It did not take long for an ironing monster to grow in our airing cupboard. A washing basket full of clothes to be ironed always seemed to be sitting there waiting for me. Even if I actually managed to empty it, it would be full again by the end of the day. Once, when we went away on holiday and my cousin lived in our flat so she could look after our cats for us, she tackled the ironing monster for me. I really thought she had defeated it, but within a few days of our return, it was back. Over the last twenty years it has followed me from London, to Kent, to the Midlands and back down to the south of England again.

I am all for getting help when you need it and am a big fan of cleaning ladies and domestic services that do all manner of things from cleaning your oven to, you guessed it, ironing. While I have had one fabulous cleaning lady and have had lots of luck with domestic oven cleaning services and the like, any ironing services I have tried have been a bit of a disaster. One, despite promising they were ironing in a smoke free environment, sent back all the shirts reeking of cigarette smoke. This was no help at all as of course I had to wash them all again. The next service managed to send back a polo shirt that did not belong to us. It was a designer one so I immediately telephoned them. “Oh, we’ll never figure out who it belongs to, so you might as well just keep it, “ was their reply. I was horrified, but felt slightly less upset when I found out that a) it fit the 21st Century Husband and b) one of his shirts was missing as well.

So I guess I am stuck with the ironing monster for now, although I intend to keep trying to defeat it. I guess it isn’t so bad as monsters go...it may be unsightly, but at least it’s quiet!!
Posted by April J Harris at 4:10 pm