Monsters, Aliens and The Case of the Disappearing Weekend 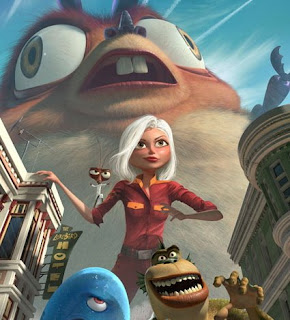 I know I have gone on about this before, but what has happened to weekends? As usual, this weekend has disappeared at the speed of light. I wish that did not happen so often. One minute I am looking forward to Friday and the next, it is Sunday evening! Never mind, it was fun. Tonight isn’t bad either, even though Sunday night is not my favourite night of the week. I’ve got a lovely organic chicken in the oven for dinner and the delicious smells of it cooking are wafting through the house. It’s very cosy.

We decided to take some time out on Saturday and went to the movies for the first time in ages. Going to the cinema with me can be a bit of a challenge as I have very stringent criteria for the movies I watch. They have to be funny or seriously interesting, there should not be too many sad bits, very little violence and last, but not least, there just has to be a happy ending. As there are not a lot of movies out there like this any more, this seriously limits the number of times I go to the cinema, and it was the reason we found ourselves watching Monsters vs Aliens, an animated feature by Dream Works yesterday afternoon.

It is a very funny film, voiced by some extremely talented actors and I have to say we really enjoyed it. It lost a bit of energy towards the middle, but the ending was happy and it did have a very positive message. (Even though life-altering changes can be really scary at the time, sometimes they lead on to something really amazing and make you very happy indeed.)

We went out to dinner but arrived home fairly early. As the 21st Century Husband had some work to do so I decided to tackle the ironing basket (my very own monster and alien combined) which had actually gotten so full I was worried it was going to take on a life of its own. This daunting task was made bearable by watching episodes of the Rachael Ray Show which I had recorded on Sky earlier in the week. If you live in the UK and you have Sky, you can watch Rachael’s show on Diva TV. If you have not yet heard of Rachael, do check her out. She is a fabulous cook and the show covers all sorts of interesting topics. It’s a great companion to the ironing, that is for sure. It’s not just for girls either; the 21st Century Husband enjoys it as well, and I caught him taking sneaky glances at the screen during breaks from his computer!

I’ve thoroughly enjoyed today as we spent it doing some long overdue tasks in the garden, including staining our much-loved garden bench which was a gift from my parents some years ago. It was looking a bit tired and worn out after three years with no special attention (they really need annual sanding and staining). Finally, this year I have managed to find the colour of stain I always wanted - Autumn Brown. Every other time the stain has been fractionally too dark for me, but this year it is perfect. Just one more coat and about a week to fully dry and I’ll be sitting out on our bench having my morning coffee. I really enjoyed staining the bench with the 21st Century Husband (and was very grateful to our son for the great job he did sanding it down). It’s not only quicker doing a task like that with a companion, it’s a lot more fun.

I’m looking forward to getting lots accomplished this week, including spending some quality time on the manuscript of my book. I’ve been concentrating so much on the website that it has been a bit neglected of late. It is nearly finished, so it’s time for a good old fashioned bit of concentration so I can get it sent off to the publisher. I’ll keep you posted on how it’s going.

Wishing you a great week!
Posted by April J Harris at 8:50 pm