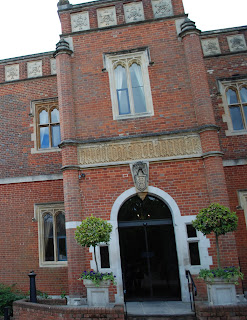 Yesterday evening we celebrated my nephew’s twenty-first birthday at the Wotton House Hotel, near Dorking. It’s a beautiful place, an old stately home (formerly the family home of a 17th century botanist) converted into a countryside hotel. Original architecture and paintings contribute to the historic surroundings in the main building, and even the modern addition has been sensitively constructed. The gardens, all twenty acres of them(!), invite exploration. It’s a really gorgeous place.

It was a bit tricky to find, as the sat nav system sent me down the ominous sounding Hollow Lane. As we turned, I faintly remembered the lady on reception saying when I booked that I should not, under any circumstances, turn into Hollow Lane. A seven mile detour that left us nowhere near the hotel told me why. In fact, for a while things were a little tense, as my son and I travelled further and further down a narrow country lane, with no mobile phone reception, and absolutely no place wide enough to turn round! Luckily we eventually found our way back to where we had gone wrong in the end, and managed to find the hotel by going in the opposite direction from that which the sat nav recommended, a little shaken but none the worse for wear.

Due to our unplanned detour, we were only just in time to get changed for the black tie celebrations - I’ve never done my makeup and changed into a dress so quickly in my life - but my husband arrived even later, having missed his train from Waterloo. Luckily he made it in time for dinner!

Despite our rather disorganised arrival, we had a fabulous time and caught up with a lot of old friends. It was great celebrating with our nephew. He’s a wonderful young man. After dinner there were some super speeches, including one by my brother-in-law. One of the things he said was how great it was to be able to grow up together with our kids. I thought it was a lovely thing to say, and although I had never thought of it that way before, how true it is!

When I first met my nephew, he was only eight months old and I was twenty-three. I had just met the man who would become my husband. I thought I was a grown up then, but boy, did I have some growing to do! Then when I married my husband, I thought surely I was a grown up. But I was wrong that time too. Then when our son was born, I knew for sure I was no where near grown up - but as our son and his cousins grew up, we “grown ups” really did grow up too.

It’s been an incredibly rewarding journey, and I do agree with my brother-in-law, that we owe a vote of thanks to the wonderful kids we grew up with - this amazing next generation - for whom I have very high hopes indeed. As for me, I hope I never stop growing, although I suppose after all these years, I really must be a grown up by now!
Posted by April J Harris at 9:55 pm