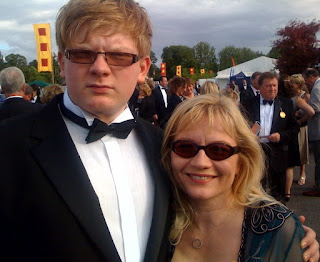 Yesterday evening we attended The Henley Festival, which is held for five days every year on the banks of the Thames at Henley. If you don’t live in England you may not know that the river Thames does not just run through London, it carries on through the countryside for miles and miles. There are loads of locks and it is a very popular river for boating and other water sports. Henley-on-Thames is a gorgeous village about thirty miles from London (and only a few miles from us) that I have blogged about before. (Please click here if you’d like to read the blog entry I did about Henley in June). Every year they have a famous five day Regatta here, and immediately after the Regatta, the Henley Festival of Art and Music begins. It is a real part of “the season” with everyone wearing black tie and evening dresses.

We arrived early, and although we had dinner booked at one of the restaurants later, we had a drink and a few nibbles in the car park (a field) while we waited. A lot of people were picnicking, and some even brought little marquees and enclosures to sit under. We had not even thought to bring our folding chairs so we stood near the car. My son made himself comfortable in the back seat, and we took this photograph just as a joke. 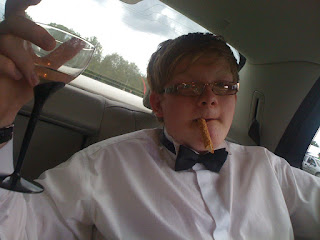 That’s a breadstick in his mouth by the way, not a cigarette!!

The doors to the festival opened with great ceremony at 6.30pm, and we wandered in through various groups of minstrels (including a fantastic string quartet) and performance artists (there was even a centurion on stilts). All the performers were interacting and chatting with the guests. 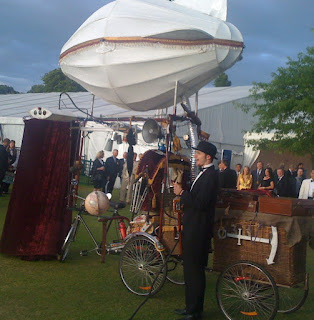 Along the riverbank were tents with displays from local art galleries, jewelers, sculpture gardens and little restaurants, cafes and bars. Our dinner was booked in The Terrace Restaurant first thing so we made our way there. It really was on a terrace, right beside the grandstand and the floating stage. There were lots of steps and it was on lots of different levels so it must have been a challenge for the waiting staff! We had pre-ordered our dinner, so everything was ready for us.

It has to be hard to serve people in restaurants that are in fact temporary, but after the amazing meal my husband and I had at Wimbledon I had high hopes. Sadly they were misplaced. My husband and I had lobster bisque to start, which did have lots of lobster in it, but it was not very warm and although it was clearly home-made had a kind of “tinny” taste to it. My son’s parma ham and melon starter was very small and included a cold pea soup. I’m not a big fan of hot pea soup, let alone cold and neither was he. My husband enjoyed his main course of lam, but my son and I had ordered the beef. Although I like my beef cooked “medium” this was too close to the rare side of medium for us to really enjoy, and the potato gratin they served with it was not cooked properly. The dessert was beautiful in appearance 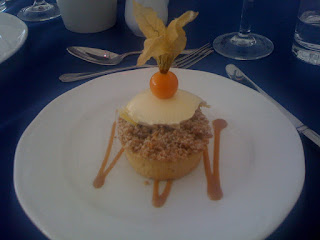 but it tasted disappointing. It was an apple and sultana crumble with clotted cream, but it was served stone cold. Had it been warmed, I think it would have been delicious. However, next year I think we’ll take a picnic for tea and have a late snack supper from one of the many little cafés scattered along the riverbank instead of paying an awful lot for something that tasted very disappointing. It was still fun though, as while we ate the performance artists wandered past, many of them on stilts. 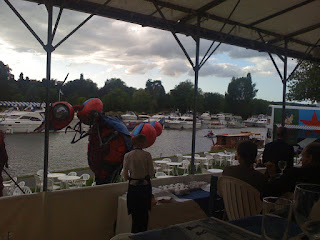 After dinner we had plenty of time to walk amongst the art work and enjoy the evening, which had turned out really well, despite dire weather predictions. At the 8.30pm Grandstand show we were entertained by The Bootleg Beatles. Although I was only five when the real Beatles broke up, I grew up on their music, and I thought this band were amazing. Apparently this should be no surprise, as they have been performing together for over 25 years - longer than the original Beatles did. You could tell the audience was loving it, particularly the people on the Promenade lawn, who were dancing and singing their hearts out. Even the boats on the river were slowing down to listen. They were then being hurried along by the Environment Agency, who police the Thames, so as to avoid traffic jams (what does one call a traffic jam involving boats?). They were not discouraged, and simply looped round again and again. We saw the same boats repeatedly throughout the show. It was really funny. One chap was dancing on the deck of his boat holding a glass of champagne. We were certain he would fall off, but luckily it never happened! 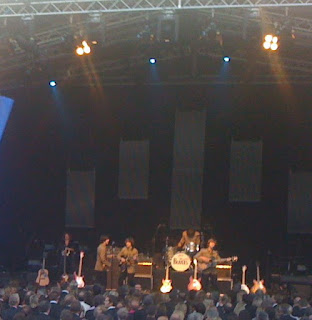 There were several other shows following on from this, but by now it was nearly 10pm so we decided to just wander along amongst the art. As it was dark by now, soft lighting bathed the riverbank. We were treated to an amazing acrobatics display when a trapeze artist performed in a lighted plastic “diamond” over the river, using only two long cloths for her trapeze. She was such a long way above our heads it was incredible, and with the light and her aerial dance it was just beautiful. Wandering on from there, we stopped at one of the champagne bars for a glass of champagne and listened to some live jazz as our evening drew to a close.

As we returned to the car we were all talking about what a lovely time we had, and making plans to attend again next year!
Posted by April J Harris at 6:01 pm