From Boston to Niagara 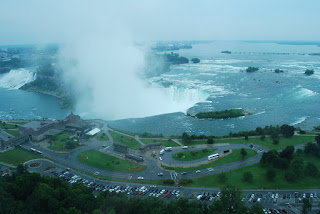 I had yet another lobster roll for lunch yesterday. This time it was back at Legal’s by the harbour. They are just so delicious! It was the first time ever I’ve had lobster three meals in a row - excluding breakfast of course!!

We had another great day sightseeing in Boston, although it was a little wet yesterday. We got a second day ticket on the Old Town Trolley tour which made it easy to get around. We also went to see the USS Constitution, the oldest American warship still afloat. We felt a tad conspicuous being British at that exhibit...

Despite the rain, we had a nice time walking round and visiting the sites. Most of Boston is absolutely lovely and I’d definitely like to go back. In the early evening my husband and I wandered out to the patriots graveyard across the road from the hotel, and saw the graves of several famous folk, including Paul Revere.

We enjoyed our meal at Cheers so much on Sunday that we decided to return last night. It is a really fun place to go, and once again the food was just wonderful. I had a delicious tuna melt, my husband had the Cheers cheeseburger and my son had the Norm burger. It’s a rather large burger and they gave him a certificate for finishing it! We had a couple of beers and a really good laugh. It was a great way to finish off our last full day in Boston.

It was a very early start this morning, and after another lovely breakfast at our hotel we set off for Niagara Falls. (I was really impressed with our hotel, the Nine Zero on Tremont Street. I highly recommend it. ) It’s a long drive to Niagara Falls from Boston - almost 500 miles so a good eight hour run with stops. We enjoyed it though, my husband and I sharing the driving and making sure we stopped frequently enough to avoid it becoming tedious. It was a good day for a drive, warm but not too hot and only a little bit of rain from time to time.

We crossed the border at the Rainbow Bridge around five o’clock and were settled into our hotel by six. We are in a wonderful suite overlooking Niagara Falls - on the very top floor of the hotel. It is something I’ve always wanted to do, and in the spirit of carpe diem (seize the day) we decided to finally do it. The rooms have floor to ceiling windows and the view is unparallelled. We can see both the Canadian and the American Falls and off for miles in the distance. We’ll be sightseeing in Niagara tomorrow (it’s a brief visit on our whirlwind round trip tour) although I plan to spend as much time as possible enjoying our amazing view!
Posted by April J Harris at 2:55 am