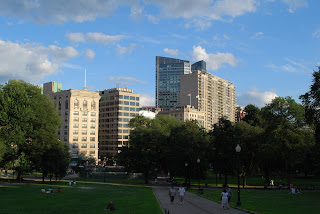 My son and I had never been to Boston, and my husband had not been in over twenty years, so we decided that the best first step was to take a city tour. City tours can be a bit hit and miss. Some are wonderful; others not so much. We decided to take the Old Town Trolley Tours because we had used them last year in Savannah and they were very good. It was a great way to get around, and we are really getting a good feel for how the city is laid out. It’s a “hop on hop off” tour so you can get on and off the trolley whenever you like, and pick up another one later. We stopped at the Harbour, where we had delicious lobster for lunch at Legal’s. We sat outside and it was just lovely. From there we went on to visit Copley Square and the beautiful Trinity Church. Then it was on to Newbury Street, the fashionable shopping and eating area. It’s full of little cafés, so we stopped for coffee, and were joined by this little fellow. 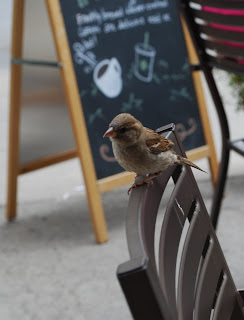 He was such a cutie, and at one point he even landed on the table and looked at us quizzically. Sadly we had nothing to give him; we were only drinking coffee, not eating anything.

We had a great day and really did cover a lot of ground thanks to our flexible transportation system. Of course, loving food as we do, one of the highlights of the day for us is dinner in the evening. On Sunday night we ate at “Cheers”, formerly the Bull and Finch, the pub immortalised in the television series of the same name. I was expecting a tourist trap, but actually the food was delicious and quite reasonable. Last night we decided to try Stephanie’s on Newbury Street. It had been recommended to us by a friend. We booked a table (something you really do need to do) earlier in the day and walked back later on. Thanks to the trolley tour we knew how to get there on foot and it wasn’t really that far.

The menu at Stephanie’s is really varied and it has a relaxed yet elegant vibe. Although I had lobster for lunch, I was completely tempted by their traditional lobster roll, so yesterday became the first day ever that I ate lobster twice in one day. Coming as I do from a country where lobster is pretty hard to find and costs a packet, this was a fabulous treat. Also the lobster was so fresh (coming as it did from only a few miles away) it could not help but be wonderfully delicious - much more so than any lobster I have ever eaten in Europe. My husband and son enjoyed their meals too - having fish and chips and a hamburger respectively. We also could not resist an “onion ring tower” to start. Served on a tall stand, the incredibly thick, lightly battered onion rings are stacked high. Wow, were they delicious. Stephanie’s serves absolutely wonderful comfort food, beautifully prepared. Its complete lack of pretentiousness alongside a real attention to detail makes for an excellent dining experience.

Wandering back across Boston Common as the evening drew to a close, I reflected on a really lovely day. I’m really looking forward to another one tomorrow!

(I have to thank my son for the super photos - many of the photos in my blog are ones he has taken.)
Posted by April J Harris at 3:40 pm