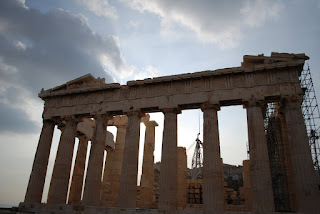 I received a letter from a reader yesterday asking me what I would recommend she visit on an upcoming trip to Athens. Krista is from Washington DC, and Athens is part of a holiday where she will be visiting lots of countries in a fairly small space of time. It got me to thinking about the number of folks we have met over the years on visits to Europe who really are trying to fit as much as possible into their two week holiday, often visiting seven or eight countries in that space of time. So I’ve decided to put a new page on the site of my favourite things to do in some of the cities we have visited (thanks for the idea Krista!). That will take a little while to put together, so in the meantime, here is some of the information I sent to Krista about Athens, based on what I would spend my time doing if I had between 24 and 48 hours there.

My first stop would be the Acropolis - easily accessed on the metro by getting off at the ‘Acropoli’ station. It’s best to get a day’s pass for the metro if you are only in Athens for a couple days. It will cost 3 Euro a day but you can get just about anywhere (except the airport, which costs extra). The Acropolis is just around the corner from the metro station, and it isn’t called the Acropolis (“high city” in Greek) for nothing! You do need to pay to climb up, but you can get a ticket for 12 Euro that covers many of the Athens attractions, so that is worth considering. It’s free on Sundays and public holidays. The climb is graduated, going up slowly, with lots of ruins to look at on the way up including the the theatre of Dionysus and lots of temples. At the top, the ruins are awe-inspiring (standing in the shadow of the Pantheon is something I will never forget) and the view over Athens is quite stunning. You can see the Temple of the Olympian Zeus, the ancient agora and across to Lycabettus Hill.

(As you come down from the Acropolis, depending on how much time you have and how agile you are feeling, you could stop at Aeropagus Hill. It’s near the entrance to the Acropolis and offers view over the site of the ancient agora. It is quite a climb though and is definitely not a place for anyone who is not sure footed (although there are some metal steps), so you might want to leave it out. I got a real thrill of standing in the steps of St Paul, who is said to have preached from this hill and converted the first Athenian Christians here in 52AD. (Less lovely is the hill’s other use, as a place of trial.)

A must see near the Acropolis is the New Acropolis Museum at 15 Dionysiou Aeropagitou, Athens 117 42 (visible as you come down from the Acropolis). It recently opened to great acclaim and I have to say it is one of the best museums I have ever visited. As you walk towards the entrance, you proceed over glass panels that cover the excavations below. Beautiful mosaics with some of the original colour are visible, along with quite amazingly complete ruins. As for the museum itself, thousands of treasures are housed in an ultra-modern building constructed of steel and glass with great views of the Acropolis itself. Admission is only 1 Euro.

I have heard that the museum café is very good, and it was always so crowded we were never able to get in, so that bodes well. Another wonderful place to eat nearby is Dionysos Restaurant or their café downstairs. We ate in the restaurant and the food was excellent. The views of the Acropolis from the restaurant are incredible as well so it would be good for either lunch or dinner.

I also recommend a visit to the ancient Agora, which includes a small museum in the Stoa of Attalos. The Stoa itself has been beautifully restored - the sheer size of it is almost overwhelming. You can get to this site by walking from the Acropolis, or taking the metro to Monastiraki station. The site is huge and includes so many ruins it is quite incredible - there are temples, libraries, basically a real insight into Athenian civilisation all those centuries ago. In fact, the stones you walk on are actually full of pieces of pottery and even pot handles. (Of course you are not allowed to remove anything from the site.) This is one of the things included in the 12 Euro ticket I mentioned when talking about the Acropolis. It is well worth a visit. In fact, if you could only visit the Acropolis, the New Acropolis Museum and the ancient Agora, you would still get a fantastic taste of the flavour of this very iconic city.

Another place I loved and that you could just about manage to fit into a 36 to 48 hour visit to Athens is Lycabettus Hill, near Sydagma metro station. Now we climbed the hill, which was very arduous, but we were treated to super views of Athens on the way up. However if you prefer a slightly easier way to the top, there is a funicular railway at Aristippou Street. When you reach the top, you are at the highest point in Athens and actually look down on the Acropolis. There is a small chapel (The Chapel of St George) at the top which is very beautiful and also a restaurant and a café both called Orizontes. The restaurant is very formal, but you can have a coffee and a snack in the café and benefit from the super views as well. It’s a bit pricey, but we had the most amazing baklava up here - my son said he would climb the hill again just for that and I think I would too! It’s very filling though as each serving was the size of a slice of pie and was served with ice cream.

Other than that, I would say that my favourite area of Athens was Kolonaki, and the area round Syndagma metro station. It includes the Parliament Buildings, the beautiful Hotel Grande Bretagne and many museums and embassies. If I only had a short time in Athens, I would spend quite a lot of time there. (I would be sure to stop for a coffee - and possibly a cinnamon macaron - in Zonar’s, a lovely coffee shop under the Attica department store too.)

I took three guide books to Athens and the one I used most was the DK Eyewitness Travel “Top 10 Athens”. It’s small enough to fit in your bag, and has easy to read maps.

So there you have it - a whistle-stop tour of Athens! Thanks for your question Krista - hope you have a wonderful time on your trip!
Posted by April J Harris at 3:22 pm