Around Athens and Back to the Acropolis 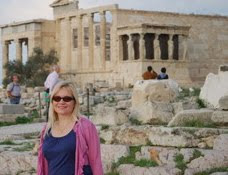 We visited the New Acropolis Museum again on Saturday and also the Temple of the Olympian Zeus, where we all got a severe attack of the giggles - much to the chagrin of everyone who saw us. I’m still not exactly sure what we were giggling about - something to do with the rain, my very small flowered umbrella and the massive columns of the temple, one of which had sadly fallen over some years before. 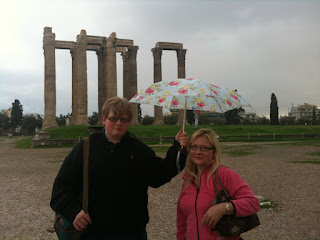 It was very busy on Saturday, and we had one too many up close and personal experiences with complete strangers on the metro, so on Sunday we decided to walk instead. Our sojourns earlier in the week had made us realise that Athens is actually not really all that big after all and a walk on Saturday night to the Milos restaurant in the Hilton just around the corner from our own hotel showed us some of Athen’s nicer residential areas. We felt encouraged by this to do a bit more travelling above ground!

(Incidentally, we had a lovely dinner at Milos, a seafood restaurant with a super reputation. It is apparently very popular with Greek celebrities. I don’t know any Greek celebrities so if they were there I was completely unaware, however it certainly was very luxurious. The food was lovely, although incredibly expensive - and it was certainly an adventure actually choosing the fish we wanted to have cooked, which lay complete on ice, their eyes staring out reproachfully at us. More about that on Recipes from the 21st Century Housewife's© Kitchen when I get round to writing about it! )

Anyway, back to our Sunday morning walk. If you proceed along from the Megaro Mousikis metro stop along Vassilissis Sofias Avenue, you pass the Athens Hilton and can then walk along past (or through) the National Garden to Syntagma metro station. Here you will find the historic Hotel Grande Bretange, the Parliament Buildings and a big shopping area. It is the home of Attica, Athens premier (and perhaps only) department store. I was disappointed in Attica, but it is interesting to see, and there are clean toilets on the second floor which is a fact worth knowing when walking in Athens. Syntagma station is also near to Kolonakai, the “posh” side of Athens, home to the wealthy and a place full of little boutiques, cafés and designer shops. You can also get to Lycabettus Hill from here.

We decided to stop at this point and have a coffee in Zohar’s, a very popular coffee shop in the same building as Attica, but accessed by a separate door. I had a lovely cappuccino, my husband had an Earl Grey tea and our son had a hot chocolate that seemed to be more a cup of pure melted dark chocolate than anything else. Zohar’s have some delicious pastries, but we had already had some of those on Saturday from their separate shop located behind Attica. It’s well worth stopping there to pick up some of their macarons, which are almost as good as those from my favourite, Ladurée in Paris - particularly the cinnamon ones.

After our break, we continued to walk from Syntagma towards the Acropolis. One of the very cool things about walking in Athens is that you literally stumble upon ruins tucked away in places you might never expect. Some of them have been covered by roofs to protect them from the elements, particularly those discovered whilst metro stations were being built. 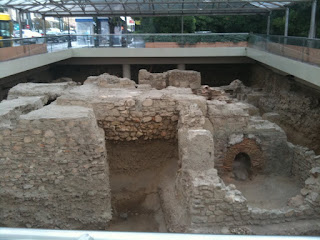 The finding of these ruins resulted in part of Syntagma metro station being relocated. They are just sitting there in the middle of the sidewalk waiting to be (re) discovered.

We made our way back to the Acropolis via some very interesting little side streets, revisiting the area we discovered on Wednesday night. Although some members of our party (ie. our son) were vocally less than thrilled to be climbing the Acropolis for the third time (which led to yet more giggles), I was really pleased to have another chance to visit this amazing place. Incidentally, there are some very nice toilets at the top of the Acropolis, just around the corner from the Pantheon and down some steps. (Just in case you are ever there and need them; it wasn’t a place I was expecting to find them!)

It’s not that I’m obsessed with toilets or anything; it is just that clean and pleasant toilets in Athens can be hard to find, particularly as in many areas the plumbing does not stand up to toilet paper and you have to put it in a bin instead of in the toilet. Needless to say this means that most public toilets are rather smelly and unpleasant to use, so when you find nice ones, you make a point of remembering them!

We headed down from the Acropolis and across the street to Dionysos, a lovely restaurant with a fantastic view of the Acopolis. There is a café upstairs, but the proper restaurant, with the view, is upstairs. It would be even better at night. The food was lovely - in fact I would say it was the best meal of the trip for me - and we shared a super bottle of wine (again more about that on Recipes from the 21st Century Housewife’s© Kitchen in due course). It was a very pleasant way to while away the afternoon.

Eventually it was time to head back to the hotel and pack up, ready for our flight home. It’s been a wonderful visit to this iconic and multi-faceted city, and a lovely family break. 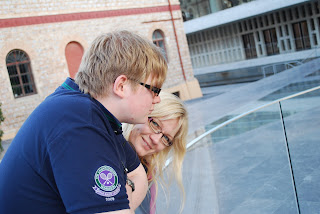