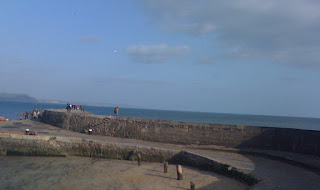 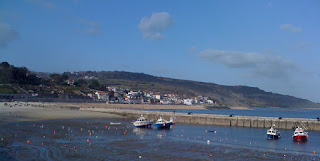 We went to visit our friends in Dorset on the south-west coast of England on Saturday. They live in some of the most beautiful countryside in the country and we spent a fantastic day with them. Part of our visit involved a journey to Lyme Regis, to walk along the sea front and breathe some fresh sea air. It was a glorious sunny day as you can see from the photographs, and also quite warm, so it was a really lovely way to spend the afternoon.

Lyme Regis is part of the Jurassic Coast, so named because it is a treasure trove of fossils. The famous paleontologist Mary Anning was born there and in the early 1800’s found the first complete skeleton of an ichthyosaur there. There are so many fossils along this coast that you find them almost by mistake as you walk along the beaches, which is a good thing as digging or chipping away at the cliffs is not allowed. Having said that, the cliffs are constantly eroding, and any loose fossils you find are yours to keep quite legally. If you don’t fancy fossil hunting yourself, there are hundreds of amazing fossils for sale in local shops. Like Mary Anning, who sold the she found fossils to boost the family income, the shopkeepers along this coast trade heavily in these coveted items.

Now there are hundreds of little sea side towns like this along the coast of Britain, but I think Lyme Regis is one of the most beautiful. If it is a clear day you can see all the way along the coast past West Bay on and to Poole. There had been a rock slide on the beach before Lyme and although it was a good few miles away we could see clearly where the earth had fallen away, exposing lighter, unweathered rock behind it. It was stunning. Although Lyme Regis has a typical seafront area with arcades, ice cream shops and souvenir havens, further back there is a honeycomb of streets full of lovely little shops and art galleries. And the front is fun in itself - we spent a pleasant half hour playing Shove Hay’penny in the arcade and between us managed to win two little toys for our six year old Goddaughter. Then our friends treated us to ice cream, which we ate while wandering along the sea front.

Lyme Regis is quite famous historically and in terms of literature as well. Jane Austen sets part of her novel Persuasion there and John Fowles, a resident of Lyme, set the French Lieutenant’s Woman there. In the opening scene of the film made from his book, Meryl Streep stands on The Cobb, a small artificial harbour dating from the time of Edward I, in very stormy weather. Having walked along The Cobb today, in fair weather, I would not be keen to do that. It slants sharply towards the sea in places and is incredibly high up. I had moments of real vertigo as we walked along it. Meryl Streep was very brave indeed to stand there in heavy Victorian garb in stormy weather! You can see The Cobb in the photograph above (the bottom one).

We thoroughly enjoyed our outing to Lyme Regis and I highly recommend it. It’s wonderful if you are a tourist from abroad as well as it has all the charm of the British seaside without too much of the commercialism that can make seaside towns seem a bit shoddy. In fact, a drive along the Jurassic Coast would make a very pleasant day (or indeed few days) out.

Whether you are an armchair traveller or are planning an actual visit, if you would like more details, please click here.
Posted by April J Harris at 4:21 pm