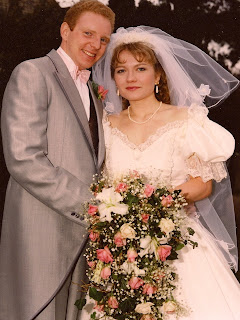 The weather yesterday was almost the same as the day the 21st Century Husband and I got married - 9th March 1991. It was really windy that day too. In fact it was so windy there is one photograph (not the one above!) where I look like I’m about to do an impression of Sally Field in the 1970’s television series “The Flying Nun” with the aid of my veil. But to be honest, aside from being a little cold, the weather didn’t bother me one bit.

Our wedding day was wonderful. It was really traditional - I wore a dress that Kristin Scott Thomas’ character in the movie Four Weddings and A Funeral would have definitely have described as a “meringue” and there was even a little page boy (who is now 21!). As we drove up to the church in a vintage Rolls Royce belonging to my father-in-law, people pressed their noses up against the windows of the pub opposite the church to watch us. Unlike many other brides before me, I arrived early for my wedding, much to the consternation of my bridesmaids, who had to rush the 21st Century Husband into the church. (There was no way you could be late if you were travelling with my Dad - he was never late for an appointment in his life). Dad walked me up the aisle - I’m not sure which of us was more nervous - and gave me away to the 21st Century Husband who stood waiting for me by the altar. It was truly the happiest day of my life up to that point.

The church we were married in, St Nicholas in Chislehurst, Kent, was originally built in the 15th century, but there has been a church on the site for over a thousand years. The history was palpable as we made our vows, and I don’t think I have ever felt as profound a sensation of eternity as I did that day. What made it even more special was that we were married on the 21st Century Husband’s twenty-fifth birthday. And that is why, yesterday, we were celebrating both our anniversary and the his birthday as well. 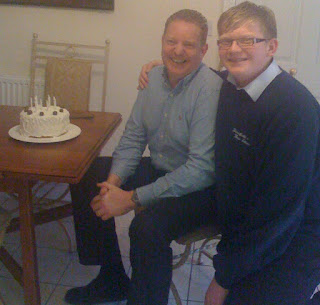 There were those on my husband’s side who doubted the wisdom of a marriage on a birthday, but I was following the example of my Mom and Dad, who had married on my mother’s birthday. I thought it was a really romantic thing to do, and would have been happy to do it on my own birthday if it had not involved waiting another four months to do so!

It was fun remembering old times yesterday, but even more fun celebrating the present. The 21st Century Husband and I spent the day together yesterday and it was lovely. We went to the Westfield Mall at White City, on the west side of London between Hammersmith and Shepherd’s Bush. It is huge and really beautiful, so like a North American mall it is wonderful. We were only there for a couple of hours so hardly got round even half of it, but we had a super lunch and can’t wait to go back. We met the 21st Century Teenager at home for tea and cake in the late afternoon. I love making birthday cakes. I’m not very good at fancy decorations, but everyone seems to like them. After a quick glass of champagne it was time to go out to dinner. We ate at Bel and The Dragon, a sort of bistro-pub on the waterfront in Reading. The food there is just amazing, and it was a wonderful evening.

We played racing games on the Wii console and drank champagne when we got home (yes, this does make playing on the Wii slightly more difficult!) and before we knew it the celebrations were over for another year. It went by so quickly, I just wish it could have lasted longer, but I’m very grateful for such a wonderful day.
Posted by April J Harris at 8:39 pm