Mistaken Identity, A Clutter Crisis and The Washing Monster That Just Won't Die 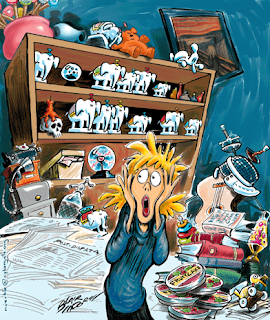 It’s been quite a week here in the 21st Century Household. The getting hit by a car thing did not start the week off well I must admit - but actually that is not when things started to go a bit wonky.

It was Sunday actually, when chaos began to seep in around the edges of my life. I started getting loads of emails that were not meant for me. They were all to do with real estate - and Sotheby’s - an estate agent in California, thousands of miles away. There were tons of them. Emails about open houses, emails arranging viewings, emails from clients talking about what they wanted in a house and their budgets - in short, emails about something I have nothing to do with. The 21st Century Husband got right on it, and discovered that these emails were all for a lady who lives and works in California - and whose maiden name was identical to my married name. She had bought a new web domain after her marriage and her email address was actually her first name @ her first name and new married name . com. In order to make her life easier she decided to forward all her work email from Sotheby’s to her personal email address, but I guess whoever was doing her web forwarding got mixed up and routed everything to her first name @ her first name and maiden name . com. Well, that is actually my email address, not hers. So all her Sotheby’s work email was coming to me - and still is actually - but I’m getting ahead of myself. I called the nice lady on Sunday and explained what was happening and she promised to have it fixed. I began forwarding her email to her. By Tuesday (over forty emails later), I was still getting her email and the marketing director of Sotheby’s was involved. After even more phone calls last night (why do I have to bear the expense of calling California when this is nothing to do with me?) the emails keep pouring in. Let’s just say it’s now Thursday (and an awful lot more emails later) and I’m really getting annoyed. I mean, I’m a nice person and everything, but having to sift through my inbox and forward someone else’s email to them makes me feel like an unpaid and unwilling personal assistant. I don’t know whether to just stop forwarding the emails in protest or what. I’ve just sent yet another stroppy email asking them to fix it, so we’ll see what happens.

Also, I’m beginning to think that clutter can actually multiply. I had a real blitz on Sunday, clearing a whole closet and moving on a lot of clothes I no longer needed. I assumed that this would be a signal to the universe that I was on the right track and I would be empowered to finally get the house organised. That’s not exactly how it has turned out. Every time I start on something else (and I’m full of de-cluttering enthusiasm here!) another issue pops up and I accomplish the square root of nothing. Thankfully none of the issues are major ones, and I am incredibly grateful for that, but minor things can be incredibly disruptive and time consuming. And somehow through this chaos, I swear the clutter is multiplying. The house is now messier than before I started to de-clutter. Go figure.

As for the washing monster, well, I’m really worried it might actually eat me. I thought the new washer and dryer I bought would mean that I would finally catch up with the three washing baskets full of clothes waiting to be washed. You see, my old washer was so temperamental and noisy it really did slow the process down, and I assumed a new one would solve the problem. Well, the washer and dryer are great, but this crazy week has meant that I have not actually been able to find time to actually get the clothes in and out of the machines. And that is before we even mention the ironing.

I have to confess the reason this is bothering me so much is that it is an important weekend in the 21st Century Household. It’s the 21st Century Husband’s birthday on Monday - and as we got married on his birthday eighteen years ago - it’s our anniversary as well. He’s taken Monday off so we can have a long weekend. I’ve been looking forward to it for ages. So, I’ve got this wonderful idealised picture in my head of a fabulously relaxing long weekend that naturally takes place in our picture-perfect clean, tidy and de-cluttered house. I now have only twenty-four hours left to pull this miracle off and frankly, without divine intervention I don’t think it is possible. I don’t like asking for divine intervention into something so minor - God has a lot more important things on his plate than the state of my house. I also really don’t want to have to ask the 21st Century Husband to do menial household tasks on his birthday weekend, and as the 21st Century Teenager is studying for exams I can’t go asking for help there either.

I’ve got twenty-four hours and the clock is ticking. I think the lady from Sotheby’s unwilling personal assistant is about to go on strike, and if you all will excuse me, I’m just off to go do battle with some multiplying clutter and a rather ferocious washing monster. (I’ll leave the ironing for now. I can always hide it in a closet - if I can find one with any empty space in it!)
Posted by April J Harris at 5:41 pm