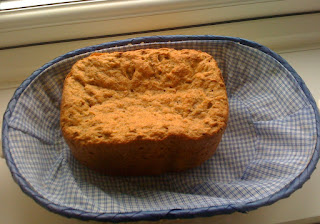 I consider myself to be a pretty good cook. Most of the recipes I invent are successful, and people often compliment me on the food I serve. But every once in a while, I hit a rough patch. This time, it has lasted three days.

It started on Friday. I bake nearly all my own bread now. It saves money and my family absolutely loves it. Plus the house smells of fresh bread which is a bonus because it means people don’t notice if the house is messy. Fresh bread = domestic goddess - whether you are one or not. Because I am not superwoman, I use a bread machine to work this domestic magic, but the results are usually absolutely fantastic. Unfortunately, Friday afternoon they really weren’t. It didn’t help that I forgot to make bread until late in the afternoon and decided to use a rapid bake setting as we were going out in the evening. My second mistake was deciding to try using country grain flour for the first time. Why I didn’t just stick to one of my tried and true recipes I do not know. Usually when bread comes out of my bread maker, it is beautifully risen and golden brown. Not this loaf. You can see from the picture above, the results were not very good at all. The worst part was, not only did the loaf look bad, but despite the fact I had used the same weight of ingredients as normal, it was so heavy it felt like I had used lead to bake it. As soon as it cooled down, it went straight out on to the bird table. To be fair, the birds did enjoy it. I’m glad, because I sure would not have wanted to eat it!

I didn’t have to cook Saturday as we went out to dinner which actually was probably a good thing! Today, the 21st Century In-Laws came for Sunday lunch. I baked a cake which turned out beautifully for tea, but we actually ended up having it for dessert for lunch - because the crumble I baked for dessert came out of the oven inedible. Now, if there is one thing I can make, it is crumble. (If you are reading this in North America, crumble is like Apple Crisp; we make it with all kinds of fruit in England.) I must have made several hundred crumbles in my lifetime - from rhubarb to apple, using fresh or frozen fruit, all of them delicious. I used the same crumble topping recipe I always use and everything. But because my fan oven was full of the main course, I used the smaller, conventional oven at the top to make the crumble. I will NEVER do that again. I remember I baked a cake in the top oven once and it didn’t turn out well either, but clearly I forgot that this morning! The crumble came out of the oven with a doughy top, but it was so soft I could not even pass it off as a cobbler. It’s a good thing my in-laws are really nice people because they could have really teased me over this one. I mean, let’s face it, crumble is pretty basic! But everyone was lovely about it and raved about the cake, which I really appreciated because despite the brave face I put on it, I was extremely embarrassed! I mean, I write recipes and articles on food for heaven’s sake - you’d think I could manage a crumble!

Hopefully my rough patch has come to an end. (Seriously, all this bad things come in threes stuff is not what I want to hear right now!) I’ve baked another loaf of bread which turned out beautifully, and I have to say the main course at lunch was really delicious. I’m looking forward to salvaging my rather damaged reputation in the coming week. But if you are having a rough patch with cooking right now, please don’t get discouraged. It really does happen to everybody!
Posted by April J Harris at 9:46 pm