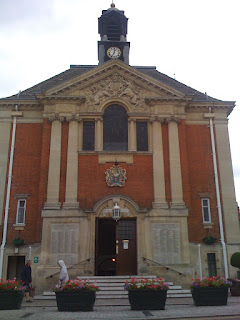 There are a lot of places in England with “Henley” in their names, including Henley in Arden in Warwickshire and villages called Henley in Suffolk and Somerset. There is also a village of Henley not far from where I live called Henley-on-Thames. That is where my husband and I found ourselves this afternoon. (Their beautiful town hall is pictured above.)

Henley-on-Thames is a very historic place, and the first medieval record of settlement is in 1179. Henley’s pretty riverside location and proximity to London led to it being a popular place to live from those medieval times right up to now. Historically it was home to the brother of artist Thomas Gainsborough and William Lenthall, Speaker of the House of Commons from 1629 to 1640. Author George Orwell spent some of his childhood here too. Beetle George Harrison lived here for over thirty years until his death in 2001, Liam Gallagher of Oasis has a second home here and many others in the entertainment field live in or very near to Henley.

It is also home to one of the major events of the British summer “season”, The Royal Henley Regatta. Lasting for five days over the first weekend in July, the regatta has been held since every year since 1839. The wonderful Henley Festival runs for the five nights immediately following the regatta (this year it runs Wednesday 8th July to Sunday 12th July). This black tie arts festival is a delightful way to celebrate the summer. We attended a couple of years ago and had a lovely time. We dined at Albert Roux’s restaurant, wandered along the banks of the Thames admiring the floral displays and art works and enjoyed performances by headlining artists which that year included singer Lesley Garrett. The festival traditionally showcases the best of all sorts of entertainment, from classical music and opera, to jazz, comedy and street theatre. We have booked tickets to attend the festival this year. There is also a Henley Literary Festival in October each year, which attracts famous authors and journalists from all over the world. There is a lot more to this small Oxfordshire village than meets the eye!

Henley-on-Thames is a great place to spend a day. It is a super example of England’s country villages with lots of lovely old buildings to look at and explore. If you enjoy retail therapy, this is a great place to indulge as many small local shops and tiny boutiques sit side by side with major retail chains. Whatever your interests, there are businesses to cater to your needs - from traditional hardware stores to up-market gift and houseware shops, to unique dress and millinery stores. There are also lots of places to visit, as well as some gorgeous walks along the River Thames. The five arched Henley Bridge, built in 1786, crosses the river here and the riverbank is a popular place for picnics.

It was a tad cool for picnicking today so we had lunch at Cafe Buendia in Bell Street. At first glance this tiny restaurant appeared to be a lunch counter, but in reality, this is a gorgeous Italian restaurant in miniature. (Check out the faux balconies with trailing ivy inside!) The food is absolutely delicious and the service is wonderful. If that is not to your taste however, there is a proliferation of restaurants and coffee bars in Henley, from the ever-prevalent Starbucks and Pizza Express to the elegant Loch Fyne Seafood Restaurant and many other small independent bistros. Of course there are plenty of pubs as well.

We had a great afternoon out in Henley today, and I’m looking forward to returning in the near future to explore some more.
Posted by April J Harris at 11:21 pm