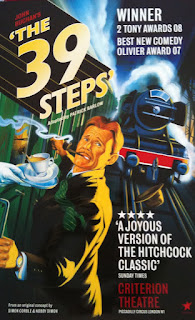 Last night we went to see The 39 Steps at The Criterion Theatre in Piccadilly Circus. Although I have been to The Criterion Restaurant a number of times, I had never been to the theatre. It is actually downstairs, underneath the restaurant which I must admit kind of surprised me!

The first production at The Criterion opened in 1874 and the theatre has a long and illustrious history. Sir John Gielgud performed there, as did many other famous thespians. During the war, the fact that the theatre was underground made it an ideal place for safe radio broadcasts, and the BBC broadcast light entertainment programmes from the Criterion in an attempt to keep the country’s spirits up. After the war, the Criterion became a traditional theatre once again. It’s really lovely, decorated with beautiful tiled walls. It reminds me of interiors I have seen from the Art Deco period, but it was of course built long before then. The architect is said to have been going for a Louis XVI salon effect and he seems to have achieved this. Whatever the style, it is very beautiful indeed. The bars and public areas are small but perfectly formed, and the use of mirrors and tile makes a small space seem deceptively large. The stage and seating area are not huge either, so the plush red velvets used for decoration and curtains create a very intimate effect. I had the sensation of being in someone’s living room, albeit a rather grand one!

The original story of The 39 Steps is, of course, far from funny. It’s a story of pre-war espionage and a man in the wrong place at the wrong time. The production at the Criterion is a huge departure from this, and although it follows the story-line of the film fairly closely, it takes the audience along a much more humorous path. Incredibly tongue in cheek, it is performed by just four actors, three men and one woman. The play is a finely crafted stage production, with numerous scene changes all accomplished by the actors themselves. While there may only be four people on stage, there are often far more characters than that present in the scene. The actors often play more than one role at one time, and yet they still manage to be utterly convincing in their myriad roles.

The whole audience spent most of the time roaring with laughter, whilst also being amazed by the talent in front of us. The 39 Steps is a great play, particularly if you are not a keen theatre goer. It manages to be light and entertaining whilst still being an excellent technical production. It would be a good way of introducing young people to the theatre (although not too young, as parts of it could be a bit scary to small children).

The 39 Steps is at the Criterion Theatre until 13th February 2010. It is also playing in many other cities worldwide, and is actually Broadway’s longest running comedy thriller. It is even opening in Tokyo in January 2010.

There are lots of ticket deals available if your budget is tight, particularly if you are able to attend mid-week. If you live in England, check out lastminute.com by clicking here

The 39 Steps is a really entertaining show and I highly recommend it.
Posted by April J Harris at 2:57 pm