Catching Up, Slowing Down and The First and Last Picnic of Summer 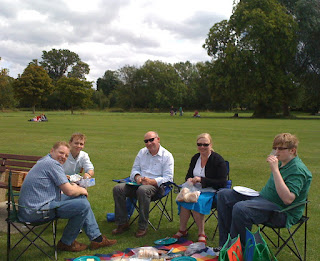 It may seem a bit of an oxymoron to mention “catching up” and “slowing down” in the same title, but that is what we spent this weekend doing - catching up with friends and relaxing. Okay, I did not really slow down that much myself in view of the fact I was doing quite a lot of cooking and catering, but for me it was slower than normal, and a heck of a lot more relaxed.

It was a Bank Holiday weekend in England, meaning that most everyone gets the Monday off work. This generally means that the weather is awful and everyone moans about how it’s never nice on a Bank Holiday weekend. This time, we had a bit of everything, nice weather and not-so-nice weather, but on Saturday it was gorgeous. Warm and sunny, it was perfect picnic weather.

We have had a pretty busy summer, and have not managed much visiting up until the last couple weeks, nor have we managed to have a picnic - not even once. This might not sound like a big deal, but summer and picnics are synonymous in England, even though our weather is often less than picnic-friendly. It’s practically un-patriotic not to have one. So when the weather was fine on Saturday, and my suggestion of a walk was met with enthusiasm, I decided this was the perfect time for the first and last picnic of the summer.

I say last picnic of summer as well because although summer does not officially end until the Autumnal equinox on the 22nd or 23rd of September, for me summer ends on 31st August. I think it is because Labour Day is celebrated in North America on the first Monday in September and when I was a kid, school used to start the Tuesday after Labour Day. This always marked the end of summer for me. Now, living in a country where there is no “Labour Day”, my personal calendar seems to have moved the end of summer to the last British Holiday Monday of the summer - which fell on Monday.

We walked all the way to Pangbourne Meadow along the Thames Path, a distance of about three miles. The time went fast because we chatted as we walked, and we did not have much to carry except the food, having sent the picnic supplies along earlier by car. When we arrived in the meadow, we found it really quiet. The Reading Festival was being held so it seems almost everyone was there. It is one of the largest annual music festivals held in England next to Glastonbury so it seems everyone was there. This meant the meadow was lovely and quiet, and it was very easy to find a place to picnic.

The weather was glorious and we sat enjoying it, the food, and each other’s company until Autumn began to remind us it was approaching with cool breezes that began to blow in off the Thames. It was a wonderful afternoon, and reminded me once again of the joys of catching up and slowing down!
Posted by April J Harris at 6:21 pm