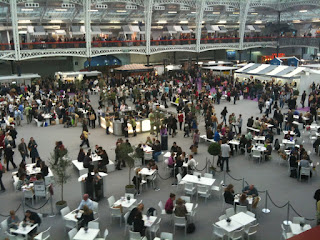 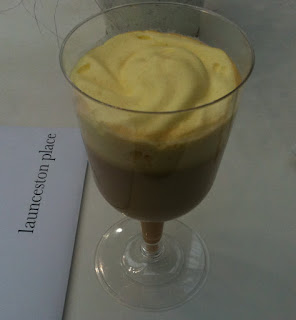 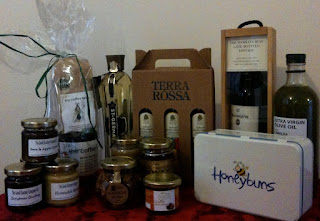 On Saturday my husband and I attended the BBC Good Food Show at Olympia, which is now being called “Masterchef Live” but which will always be “The Good Food Show” to me :). We attend the show every year, and I think this year was one of the best.

Small producers, wineries and shops that sell things for the kitchen and home all get together and display their products at their own stands - most offering samples and very good “show deals” if you decide to purchase their wares. Major restaurants - which this year included Launceston Place, Theo Randall at the InterContinental, The Ivy, The Boxwood Cafe and Caprice offer small but exquisitely formed portions of their signature dishes for purchase in the Restaurant Experience. There are also shows, demonstrations and lectures about all things food and drink by some of the larger suppliers and also by groups such as Slow Food. Various celebrity chefs also attend. Masterchef Live showcased some of the talent from previous Masterchef competitions and some brave souls submitted themselves to the invention test. They were given five ingredients (unknown until the actual moment of the competition) and twenty minutes to prepare a dish from them. The results were quite amazing. Although tempted, I did not enter myself. You see, a large part of the Good Food Show is wine and spirit tasting, and as much as I love inventing dishes, I am better doing it when I have not been imbibing!

We visited the stands of some of the producers we already know and love like Honeybuns for their gorgeous cakes and Littleover Apiaries for their wonderful honey. We also discovered some new ones. I was particularly impressed by The Coffee Fairy, a company run by Martina Gruppo. She sources coffee from Miraflor in Nicaragua (actually going there and getting it herself!) and ploughs a portion from the sale of it back into the community there, working to offer educational scholarships to enable the children to go on to secondary school, and also renovating the school there. The coffee tastes amazing; we purchased some at the show and I’m planning on taking out a coffee plan. I was also impressed by the wonderful sauces and chutneys offered by The Good Chutney Company. I bought two jars of their scrumptious Horseradish Mustard along with some other goodies including a yummy Gooseberry Chutney. We also bought lots of wine and port, and may have found a new bespoke wine sourcing service - I’m waiting for our delivery and then I’ll let you know!

Lunch consisted of various dishes at the restaurant experience. The servings are small so you can taste lots of things, and sharing is definitely allowed! We started with lobster soup with brandy and saffron cream served in a cocktail glass from Launceston Place (see photo above), and then I tried The Ivy’s beef and bashed neeps while my husband chose Masterchef winner Steve Wallis’ pan roasted sole with chantrelle mushrooms, oysters and white wine sauce. Everything was delicious. We then went to see the show we were booked in for at Masterchef Live. Later we returned to the Restaurant Experience. This time we shared two dishes from Roast Restaurant - Pork Belly Bridge Roll and Fish finger and tartare sauce cones. Both were fantastic examples of comfort food at its best. By then we were ready for dessert. We shared the vanilla and gingerbread cheesecake with mulled fruit from the Boxwood Cafe which was light and delicious (the mulled fruit had lovely zing), and also the soft chocolate cake from Theo Randall at the InterContinental. His chocolate cake was by far our favourite dish of the day. Served with a soft marscarpone cream, it literally melted in your mouth, and was one of the nicest desserts I have ever eaten.

We stayed at the show until nearly closing time and there were still stands we did not have time to visit. We brought home loads of goodies and have all our Christmas wine and spirits ordered too. It is a wonderful way to spend a day out and I highly recommend it. If you missed Olympia, the next BBC Good Food Show is being held at the NEC in Birmingham November 25th to 29th, or there is a Summer one being held 16th to 20th June 2010. The next BBC Good Food Show at Olympia in London is in November 2010.
Posted by April J Harris at 9:54 am