A Letter From My Younger Self 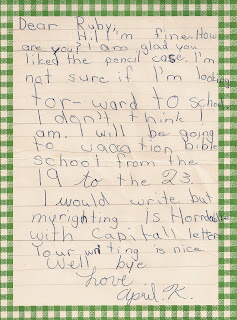 I can’t say I remember writing this letter;  I do, however, remember the stationery.  It came in a large box with sheets that had three other colour borders exactly like this one - blue, red and orange as I recall.  I used to love how it looked all pristine and crisp in the box. The envelopes had matching borders as well.
My cousin Ruby sent this letter to me last week, tucked in with my birthday card.  She found it when she was de-cluttering and thought I might like to have it.  She was right.
Over the last two years I have been going through my parent’s things - boxes and boxes of photographs, letters and paper souvenirs.  I’ve found some wonderful letters - including love letters my Dad sent to my Mom in 1957, just weeks before they got married, and lovely letters sent from my Grandpa to my Grandma while he was on a business trip in the early 1920’s just after the birth of their first child (Ruby’s Mom) - but with only one exception, I have not found any letters from me to anyone else so it sure is nice to have this one.
Like all the letters I wrote in those days, it has rulered pencil lines to help keep my writing straight.  I had a tendency to write very downhill, resulting in pages with the words running towards the right hand corner, so my Mom always got me to draw pencil lines first.  For someone who later excelled at English and languages, my spelling is pretty bad, but as I can’t be any older than six or seven I suppose I should not be so hard on myself.  I wonder who told me that my writing was horrible ‘with capital letters’? It isn’t something a child would know - they would have to be told that.  I do have to laugh at my spelling of ‘horrible’ - where on earth did I get ‘Horrdablle’?!
I wasn’t sure if I was looking forward to school - probably because at that point I was being bullied pretty badly.  I was bigger than everyone else in my class and because I was an only child my vocabulary was a bit over-developed.  This made me stand out, and kids hate it when someone stands out.  I also had a rather cumbersome last name that was basically an open invitation to tease.  Don’t get me wrong, I was proud of being a Killingback, but the little girl that I was would have been very relieved if someone could only have told her that her married name would be something as ordinary as Harris.
Reading the letter brought back happy memories of the vacation Bible school I used to attend at St James-Rosemount United Church.  I remember it was always fun, and the crafts were pretty easy to do - something that was important to me as I’ve never been very good at crafts!!  There was a painting in one of the rooms of Jesus knocking on the door to someone’s heart - you know the one where there isn’t a handle on the outside because you have to open the door from the inside so He can come in? I can see it so vividly in my mind it’s like I am back there once again.  I wonder if it’s still hanging on that same wall.
I signed my letter ‘April K’ because in school they always got us to write the first letter of our last name with our given names on everything.  It wasn’t like there were very many Aprils in those days, but I guess it made it easier if all the kids did it, not just the ones that had more common names.  If you forgot, there was hell to pay, so I used to write ‘April K’ on everything, even when I wasn’t in school.
I haven’t thought about that little girl in a long time, the one who wrote the letter.  She seems a million miles from the woman I am now.  She would never have believed how far from home she would travel or how wonderfully her life would turn out.  I almost wish I could go back and whisper it in her ear, along with the fact that before long we’d all be using computers so her handwriting being “horrdablle” would not matter very much at all.  I’d be a lot kinder to that little girl than she was to herself, and I’d tell her not to worry so much because aside from some unavoidable sorrows, pretty much everything was going to turn out alright.
It’s good to be reminded of who you were. It highlights how far you have come, and holding something physical from the past in your hands re-awakens memories that you have tucked away so carefully they somehow have gotten lost.  And no matter how much I think I’ve changed and grown, that little girl is still right there inside me.  She helped make me who I am today, and although I would not trade places with her for anything, she was pretty special in her own way.  It was nice to be reminded of that.  Thanks Ruby.
Posted by April J Harris at 6:23 pm