One of the first stories I remember being read to me just after I started school was ‘Make Way For Ducklings’ by Robert McCloskey. Although it had been written over twenty-five years before that, the story of Mr and Mrs Mallard and their eight ducklings captured my imagination. I’m not the only one. The book has never been out of print since its publication, and it is the official book of the Commonwealth of Massachusetts.
Set in the Boston Public Gardens, Make Way For Ducklings tells the story of Mr and Mrs Mallard, who are looking for a place to settle with their young family. A rather hazardous and eventful journey (with some assistance from a kind policeman named Michael) eventually leads Mrs Mallard and her babies to the Boston Public Gardens where her husband,who has been looking for a home elsewhere, then joins them. A statue of Mrs Mallard and her eight offspring stands in those very gardens today and people from all over the world come to visit it. 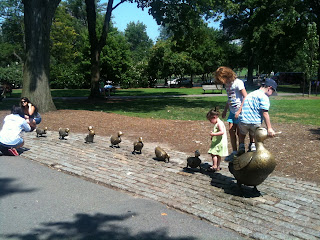 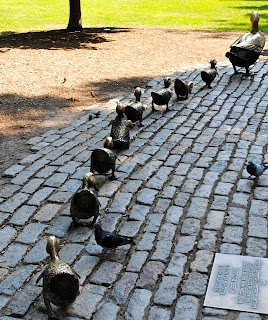 The little girl inside me was thrilled to find the bronze statues of Mrs Mallard, Jack, Kack, Lack, Mack, Nack, Ouack, Pack and Quack in the Boston Public Gardens this week. In fact I have wandered back twice since to see it again. It is such a happy place. It is almost impossible to photograph the sculpture without children playing on it, and I am certain that is just how both the sculptor Nancy Schon, and indeed Robert McCloskey, would want it to be.
After I had visited the sculpture again this afternoon on my way back from the State House, I was walking through the Public Gardens when suddenly out of nowhere, a mother duck and her babies appeared. She actually changed direction to walk over towards me and came up so close to me I was absolutely amazed. (I didn’t have any bread or anything!) 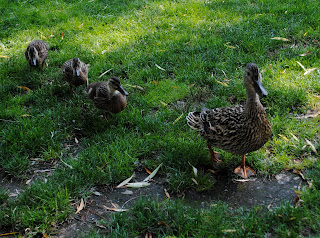 Okay, there were only three ducklings, and I know that Mrs Mallard and her family were just creatures of Robert McCloskey’s imagination, but as someone who believes that God is in the detail and that there is magic in everything, well, I was pretty thrilled all the same!
Posted by April J Harris at 3:42 pm