Up until this year, I really felt that vegetable gardening was the preserve of the experts – people who had been gardening for years and knew what they were doing. I had gardened with my Dad as a child, and I always thought of him as someone who knew everything. I pictured our older friends, the ones who grew prize zucchinis and Ken, a man my husband used to work with. He often had a glut of vegetables and was very willing to share, coming round with huge, snowy white cauliflowers and beautiful cabbages on a Saturday morning and leaving me with my arms full of enough produce to feed us for the week. He’d never accept a penny for it either.
Inspired by him, I did try growing vegetables one year when my son was little, digging a bed about ten feet by six feet in the corner of our garden, but I had limited success aside from my scallions, which were beautiful, but not much reward for quite a lot of effort.
It took me until this year, after more than ten years and two successful flower gardens, to get my courage up to try again. I had been growing the odd tomato plant in a pot, and nursing along some herbs on my windowsill, and as they didn’t up and die on me I figured I might as well have a go. So when the garden in our newest house was landscaped last year, I asked them to include two raised beds for vegetables.
I did a little research and early this year I ordered plug plants from an organic supplier. I also supplemented this with some purchases from a wonderful plant stand at our local farmer’s market. I was too nervous to start from seeds and I thought that at least if the plants started out strong they might have a chance of success in spite of the inexperience of their gardener.
I thoroughly enjoyed planning where everything would go and planting them up, and was really pleased when I stepped back and looked at what I’d accomplished. 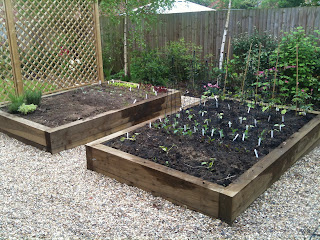 My biggest worry was that a month later we were heading off to California for two weeks, and I really didn’t feel I could ask a neighbour to water as they might feel they had to do our whole garden. My vegetable garden is small, but my whole garden is something else entirely. I decided, very selfishly, to pray for rain while we were away. On our return, I was greeted by this:- 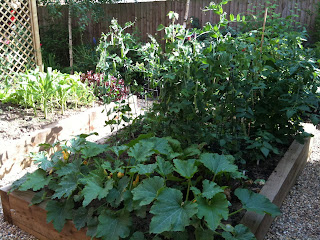 Not only had my prayers had been answered, but I can truly say that this garden was thriving on neglect. This was a very good thing. I’m not good at regular weeding, and although I will water if I am here, I am often travelling.  Indeed, less than a month later we were off again on a family holiday for two weeks. In the meantime we ate very well indeed from our garden. As for when we went away, I’m told it didn’t rain as much this time, but clearly, it was enough as when we got back, well, I just tell folks that it was like the garden had exploded. 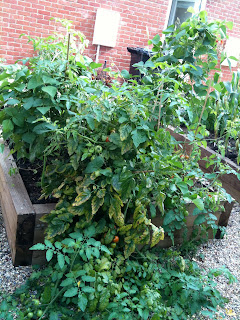 I wondered if my tomatoes were actually trying to take over the world as they spilled out over the sides of the beds, vines heavy with ripening tomatoes. No one left our house empty handed, they had to take produce with them, especially zucchini which we ate practically every day for weeks– in cakes, as side dishes, you name it, I made it. We had fresh beans and peas, tons of beautiful tomatoes, and while the lettuces had finally begun to go to seed, I was still managing to get salads from the garden too. Not long afterwards, I pulled out some of the plants that had begun to stop producing, as well as the lettuces, and put in some new plug plants. I’m now enjoying the last of the first crop and looking forward to the second. 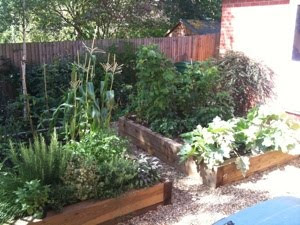 I’m not a good gardener. My friend is out in her garden every day weeding and tweaking, if only for a few minutes. Aside from going out to harvest, my poor garden only gets frantic bursts of activity about once or twice a week. And yet I have had so much produce from it I have hardly had to buy any vegetables this summer, except a few favourites from the farmer’s market.
In short, I honestly believe that anyone can grow vegetables. You will have disappointments – my carrots resembled tiny extra-terrestrial creatures and had so many extra bits growing off them I couldn’t even manage to peel them. Nine corn plants resulted in only two edible corn cobs – one that looked normal, and one that at less than four inches long is a perfect, tiny replica of what a corn cob is meant to be.  However these disappointments will be well outweighed by the sheer joy of growing something – even if it is just one pot – and by eating the freshest vegetables you possibly can. Look what I accomplished with so very little effort! Heaven knows what you can achieve it you really go for it.
I’m now researching autumn gardens and investigating growing things in pots into the cooler weather. I was thrilled to learn that parsnips actually taste better if you harvest them after the first frosts. The me who hesitantly commissioned two raised vegetable beds in her garden last year would never believe how far the garden and I have come.
So don’t hesitate a moment longer, look into growing some vegetables of your own. And if it is too late to start where you live this year, grow something inside in pots on your windowsill (herbs and salad are good) while you plan next year’s garden – even it that will only be a few pots on a very small patio, or an extension of your window sill garden. Never has the old adage “size doesn’t matter” been more true than when it comes to gardens. And I cannot tell you how much confidence it has given me to know that I am capable not only of cooking food for my family, but of growing it too. Go on, get growing! You will be the richer for it – both in terms of your well-being and your wallet.
Linking up with:-
Posted by April J Harris at 12:07 pm