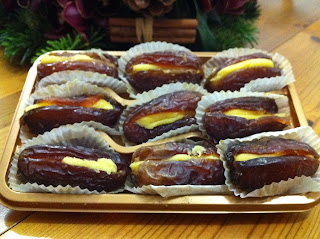 When my husband was little, his Granddad Pip made Marzipan Dates every Christmas. They became the stuff of memory, and every year my husband makes a big batch in honour of his Granddad and those days gone by.
Like my husband’s Granddad, these treats were Victorian in origin. They would have been referred to as ‘sweetmeats’ when he (Granddad) was growing up, and were often eaten at the end of a meal. Sweetmeats originally referred to offal, but from the Victorian era the word came to mean sweet, candied or glacé fruit.
Marzipan dates could not be easier to make, and packaged in pretty containers they make a lovely gift.