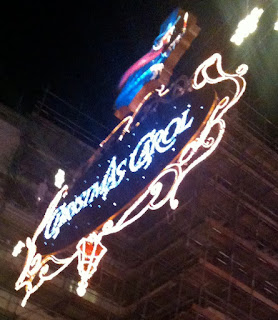 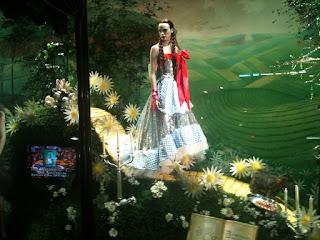 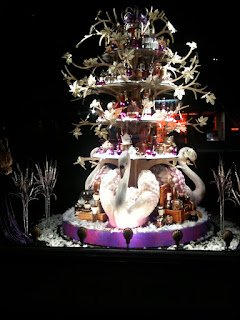 London is a magical place at Christmas. I made my first trip of the season up there on Wednesday night. It was a lovely evening and I had a lot of fun working on my Christmas shopping. I’ve only just scratched the surface in terms of seeing all the lovely decorations though, seeing the lights on Regent Street (top photo) and the windows at Harrods (middle) and Fortnum and Mason (bottom).

All along Regent Street there are “nets” of lights, making it into an absolute fairyland. Regent Street itself is featuring lights celebrating the new animated Disney version of “A Christmas Carol”. Again, this is not my favourite film, having had to watch the very scary 1938 version in school in Grade One and being terrified by it. (The film was already over thirty years old by then; why they showed it to six year olds in the 1970‘s is beyond me!) The lights are really pretty though. 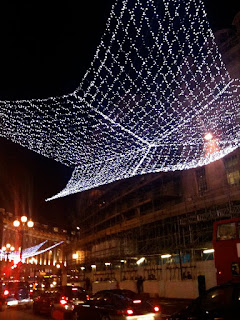 There seems to be a “retro” theme this year, with Harrods choosing to concentrate on on a film originally made some years ago - the 1939 movie “Wizard of Oz” starring Judy Garland. In celebration of the film’s seventieth anniversary this year, a new digitally remastered DVD has been released and Harrods are promoting it. I have to confess that once again it is not my favourite film; as a child it scared me silly and I’ve never been able to watch it comfortably, even as an adult. But the window designers have done a lovely job, and the results are stunning. They are also other windows featuring some of their products done up for Christmas which are very pretty too. (In fact, I think I prefer them!)

My favourite shop windows so far are the ones in Fortnum and Mason, designed in celebration of Michael Bourne’s production of Swan Lake at Sadler’s Wells. As I said earlier though, I’ve only just scratched the surface - the windows at Harvey Nichol’s, Liberty’s and Selfridges are among the many I have still to see. I am definitely planning a return trip within the next week or so.

I do love London. Despite the crowds and bustle, it is like nowhere else on earth. There is so much more to it than meets the eye, and after years of spending time there (living and working there for a number of years at one point), I still discover things to surprise and delight me. This passage, just off Regent Street, has always tickled me - 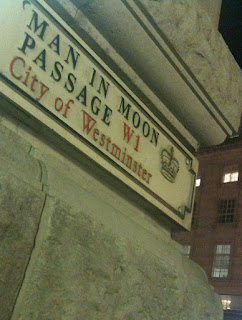 Sadly its name is far more exotic than the reality of it as it is simply a cut through from Regent Street to Piccadilly via Vine and Swallow Streets (with a slightly chequered history), but every time the sign catches my eye, it makes me smile nonetheless!
Posted by April J Harris at 11:40 am