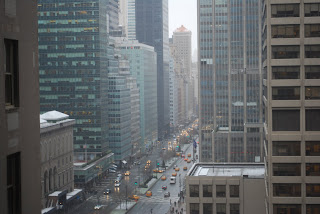 Today was the day – the 21st Century Teenager’s Sixteenth Birthday – the main reason for our visit to New York. We started off with breakfast. Our Starbuck’s breakfasts are becoming a habit, especially as there is a branch right in the Waldorf Astoria hotel where we are staying. You can take your food into the glorious lobby and sit in the numerous sofas scattered around. It’s also the only place you can get free internet access in the hotel so we usually take our computers along with us. It has been incredibly difficult trying to keep my blogs updated this trip as the WiFi at the Waldorf is not the quickest, and has a habit of dropping out occasionally, just at the most inopportune moment! However should the WiFi drop out there is plenty to look at in the lobby. There are two lobbies, one on the Park Avenue side of the hotel, and one on the Lexington Avenue side. These are joined by a corridor lined with gothic columns where you can find the rest rooms and a small room where you can pay to have your shoes shined within an inch of their lives. It’s well worth the $7 charge – I have never seen the 21st Century Husband’s shoes look so shiny! The Park Avenue lobby is where the majority of the Christmas decorations were until yesterday. Magnificent trees towered overhead, and hundreds of poinsettias lined the stairs on each side of the lobby. Today the trees and poinsettias are gone, replaced with a round floral display that is over ten feet tall. The lobby on the Lexington Avenue side houses the famous Waldorf Clock, and is also home to the reception and concierge desks. Tucked in on one side is the Peacock Alley restaurant where we had a marvellous dinner last night. It is named Peacock Alley because when the Waldorf Hotel was joined to the Astoria Hotel many years ago, people from high society used to like to walk up and down in their finery – a bit like peacocks!

The 21st Century Teenager had some birthday money in dollars and had decided that he wanted to buy one of the new iPod nano-chromatics at the Apple store on 5th Avenue. So we headed off in a shiny yellow taxi. This was our third visit to the New York Apple Store (we are sad, I know!) and it really is the most fantastic Apple Store I have seen. A glass cube rises up out of 5th Avenue, just in front and to the left of FAO Schwartz and across from The Plaza Hotel. The Apple logo hangs suspended in the cube. When you walk in you can either walk down a circular staircase or you can go in the amazing round glass elevator to the shop floor downstairs. Although I’m not a big fan of elevators, I could not resist today. It was just the three of us in this very funky elevator. It was like something out of “Get Smart” (in fact we all started humming the theme tune on the way down and then burst our laughing which did get us some very funny looks)! Once we had arrived on the sales floor, it took some time for the birthday boy to decide what colour of nano-chromatic he actually wanted. In the end, he decided on a red one, as not only does it look very great, but Apple give a donation to the Red Charity fighting AIDS in Africa for every Red nano-chromatic purchased.

Lunch was at our new favourite place, The Russian Tea Room. As it was Sunday they were serving brunch. The 21st Century Husband had the Eggs Florentine he had enjoyed so much the last time. The 21st Century Teenager and I decided to have their Pecan Pancakes with Allspice Syrup and Fig Honey. I have to say they were the most amazing pancakes I have ever tasted. The syrup was maple, but spiced in a delightful way, and the fig honey was a real symphony of flavours. I would never have thought to put nuts in pancakes, but believe me, it works! We spent a lovely hour or so eating our brunch, drinking our tea and revelling in the wonderful surroundings and history. I have heard that royalty have dined here, that Rowan Atkinson, the British comedian, was married here – and that Madonna was a coat check girl here before she became famous. The history of the place is just palpable – you can almost see the shadows of diners long past out of the corner of your eye. It is everything I dreamed it would be when I promised myself as a child that one day I would eat here. I was reading a book set in New York, the title of which escapes me, but the author’s vivid (and I must say very accurate) description convinced me that life was not complete without a visit to this wonderful place. I am so pleased to have been twice and I hope to return many times in the future – it is definitely a family favourite.

We spent the rest of the afternoon wandering around the Fifth Avenue area, around Rockefeller Centre and in and out of the fascinating shops that line this famous street. We got back to the hotel in time for a glass of champagne and some nibbles in our room. Then we all got ready for our big night out at the Rainbow Room. We took a taxi to Rockefeller Centre and were escorted by an attendant to the elevator which went straight up to the 65th floor. I think my stomach stayed somewhere about the 20th! We walked out into a very crowded lobby, which did surprise me as I was expecting something understated and elegant, but instead I was greeted with chaos. Luckily we were seated by the window at a very nice table. The view was stunning; I was just shocked at the sheer number of people we were sharing it with. The service was not very good, and we waited a long time for just about everything, including our glasses of tap water. The look on our servers face (he called himself our “captain” which is apparently New York speak for head waiter) when I asked for tap water was quite something. In the first place I try not to drink too much bottled water as it isn’t good for the environment, but I certainly was not going to drink it here as it was between $13 and $17 dollars a bottle. Frankly I would rather put that amount of money towards the wine! When he finally got round to bringing our water and our wine we were able to order. Luckily, the server’s (sorry, captain’s!) lack of finesse was more than made up for by the wonderful food. It was quite something eating our dinner looking out over the New York skyline. I had a traditional New York Shrimp Cocktail for the first time – five huge shrimp served on crushed ice with a dish of spicy sauce, just like my Mom used to make! The 21st Century Teenager had a lentil soup and the 21st Century Husband had Calamari – which the 21st Century Teenager and I could hardly look at as it contained several whole baby squid, breaded and fried. He did say it was delicious though. For main course the birthday boy had a steak – which was sadly overcooked (a rare thing indeed these days!). The 21st Century Husband and I had veal – Marsala and Scallopini respectively. It was very good indeed. We decided to forego dessert, both for reasons of being full and also because our bill was already rapidly approaching $300. I have to say it was not the best meal or service I have ever had, but it was something very special to eat in the famous Rainbow Room. I have to say I am delighted we did as I found out as we were leaving that it is closing on 12th January – after being in business since 1934 – because of economic troubles. So it is a wonderful thing that we went!

After another hair raising ride in the elevator – my stomach definitely arrived downstairs after I did - we wandered back to the Waldorf Astoria. New York is beautiful at night, and there are so many police around that provided you don’t go down any side roads it seems to be very safe. We retired back upstairs to our room – which I forgot to mention is on the 13th floor, but with a beautiful view (see the photograph above) – and had another glass of champagne to toast a wonderful day – and a wonderful sixteen year old!
Posted by April J Harris at 6:42 pm