Starting Off the Week 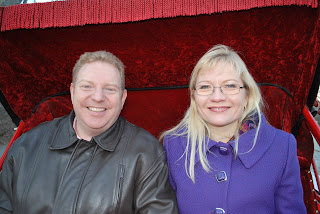 This is one of my favourite photographs from our visit to New York. The 21st Century Teenager took it when we were riding through Central Park in a horse drawn carriage. You can see from our faces how much the 21st Century Husband and I are enjoying ourselves. It is a great memory of a wonderful trip.

We did have the quiet weekend I was hoping for and we all thoroughly enjoyed it. I had a yoga class on Saturday which really helped me to feel balanced and settled again. For the rest of the day we just pottered round the house, and that evening we watched “Hancock” a very funny film about a slightly unconventional superhero starring Will Smith. It was a great laugh.

We slept so late on both Saturday and Sunday that we had brunch both days. I even made pancakes on Sunday, which is not something that happens very often! We stayed around home most of Sunday, except for a visit to The Club at Mapledurham, a golf and country club near us. We took a tour and have joined as health and fitness members. It does not seem quite as nice as The Branston Golf and Country Club, which we belonged to when we lived in the Midlands, but everyone was very friendly and the facilities seem quite good. They also have a small bar and restaurant with a varied menu. Plus it is reasonably close to us which is a boon as it seems that everything we do involves driving somewhere at least twenty minutes away. It does take a good twenty minute to get to the club but it is a straight-forward drive, and provided we don’t travel at rush hour, it is pretty traffic free.

Sunday after dinner I was delighted that we decided to do something we have not done since my Dad passed away. We all sat down and played Crib – or Cribbage – my favourite card game in the whole world. I remember watching my Dad and Grandpa playing cribbage on the very same table I have in my kitchen now, and desperately wanting to learn how it was done and be included. As it involves counting and math, I had to wait until I was about seven to begin to learn, and I remember feeling unbelievably grown up when my Dad said he would teach me how it was done. I played game after game with him, until I was good enough to play with the Master, my Grandpa. I was so thrilled the first time he played with me, and as for the first time we played three-handed Crib, my Dad, Grandpa and me, well, I thought I’d died and gone to heaven. I was all of eight years old. Grandpa loved Crib too. He had learned to play as a young lad in the trenches in France during World War One. Grandpa was funny about Crib. He didn’t mind losing the odd game, but if he lost more than two in a row he would usually decide it was time to stop playing!! Anyway, I thoroughly enjoyed our Sunday night game, the 21st Century Husband, Teenager and I round the table where I first learned to play all those years ago. It’s a lovely way to remember people, keeping traditional games and stories alive. In fact, we all enjoyed it so much that it looks like it may well become a Sunday evening institution. I do hope so.

It is another busy week. I’ve already had a session with my personal trainer today, and I’ve got yoga again this afternoon. The 21st Century Teenager has an interview at a Sixth Form College tomorrow and Thursday we have to drive to Birmingham for an orthodontist appointment. I’m also getting ready for the weekend, which I am really looking forward to as our friends are coming to visit. It’s all go!
Posted by April J Harris at 9:57 pm