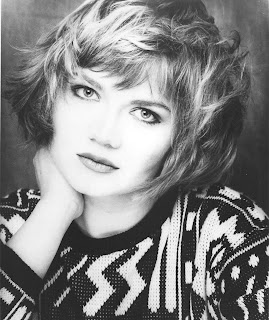 My long blond hair has always been something of a security blanket for me. For the last twenty plus years it has been long, and but for my early childhood and a three year period when I was modelling in my early twenties, it has always been long. As a child of the sixties, one would have imagined I would have long, flowing hair, but my parents were anything but hippies and my Mom held a strong belief that long hair was difficult to care for. Added to this was an unfortunate accident between me and a pair of scissors (that were only meant to cut paper but were unfortunately more than capable of cutting hair) and I was stuck with short hair until I was nearly ten years old. For most of that time I had a “pixie cut”, which did look cute, but which I absolutely abhorred. I had not meant to cut my hair when I was two years old, I had been cutting some paper and watching television at the same time. My mom was with me but, having had two wisdom teeth removed the day before, had nodded off on the sofa. When she awoke I was distractedly running the scissors through my hair and watching television at the same time. I have no idea what I was watching, but clearly it was either very interesting or very disturbing. My Dad whisked me off to our friend Jenny, who was a hairdresser. On seeing my hair, she promptly burst into tears. Although I do not remember cutting my hair, this is a memory that is as vivid today as if it were yesterday as it was the only time I ever saw Jenny cry. She was like a second mother to me until she died about ten years ago, and a relationship of such duration always involves sorrow as well joy, so that is saying something!

She somehow managed to “do something” with my hair but from that moment onwards a pixie cut was the style of choice for me (not my choice I hasten to add). I dreamed of long flowing hair – an impossibility I was now informed as I had “cut all the wave” out of my hair. I know my Mom did not mean to be unkind, it was just her already strong prejudices against long hair had been joined by the horrific memory of my unintentional naughtiness and short hair seemed the easiest solution. By the time I was nine I was determined to have long hair, but several years of interesting versions of layering encouraged by those who still preferred the pixie style meant that I never really got my long flowing locks until I was about fourteen. Once I got them I hung on to them for dear life, and at one point my blond hair hung well below my bottom.

In the early eighties, I was eager to bolster my flagging self esteem by taking a modelling course. No one was more surprised than I when the owner of the school, who was also an agent, suggested I might like to appear on their head sheet. The only contingency was that my hair was out of style and a shoulder length cut was recommended. I was horrified, but the promise of fulfilling what seemed an unlikely dream (I was, and am, only five feet two inches tall), beckoned and I consented. I did some photography modelling, a bit of video, and a lot of runwaywork in shopping malls, hotels and other large venues all over southern Ontario. All throughout this period, my hair got shorter and shorter, culminating in the look you see above. It must have been popular as I placed in the top ten for “cover look” at a Canada wide modelling competition sometime in the mid-eighties. But I was never really happy with it. In the real world (without stylists) I always struggled with it and felt a keen sense of loss about my lovely long locks. I had realised that I was never going to be the next Cindy Crawford, but modelling paid well (when I could wrestle the cheques out of my agency who were always late payers) and I stuck at it for a while. Eventually though, my focus on moving to England became more important, and I decided other work might provide a more stable income. The first thing I did on leaving the agency was begin to grow my hair. When I left Canada a few years later, it was well below my shoulders and has stayed there ever since.

All this is a round about way of saying that I have finally consented to a slight change of hairstyle, which for me is a hugely big deal. I have a side parting and the front bits of my hair had always tended to break, so I suggested a few layers at the front to my hairdresser Jo. I had also noticed the back of my hair had quite a lot of split ends, and Jo confirmed that a “good cut” of about two inches would really benefit it. This would still leave it some inches below my shoulders except at the front, where the shortest layer would still allow me to put my hair back easily. Although I had thought about it for some time, it was a bit of an impulse decision in the hairdresser’s chair yesterday afternoon. I did have a few moments of trepidation. The look on my face as she began to cut made Jo gently turn the chair so I could not see the mirror and when I picked quite a long piece of hair off my trousers I felt a little sick. In the end though she did an amazing job. Miraculously my hair looks thicker even though there is less of it, and if I tuck the front layers behind my ears you can hardly tell I have had it cut. Conversely, if blown dry forwards towards my face, my hair lifts my strong jaw and according to everyone who has seen it, makes me look younger, much to the horror of the 21st Century Teenager who is already fed up with people asking if we are brother and sister. Needless to say, he is encouraging me to “grow it back”!

Although it was a wholly successful experiment, I have had some moments of regret. My first glimpse in the rear view mirror of the car made me think of a take on a silly movie of a few years ago and caused me to remark to the 21st Century Husband and Teenager - “Dude, where’s my hair?” They just laughed and pointed out there was still rather a lot of it. It does have a huge amount more body and shape and on the whole I am very pleased with it. The fact that so many people have told me it makes me look younger has helped too!

This experience has definitely confirmed that my hair is a whole lot more to me than just an accessory. The nine year old inside me who rebelled by growing her hair long is still alive and well, and wondering why on earth I would mess with even an inch of my long locks. But the older version of me realises that you can improve on something that works and that sometimes you have to give up a little in order to get an awful lot back. I will publish some photos in the next week or so, but the change is so unremarkable it would probably be nearly un-noticeable unless you were in the habit of seeing me on a daily basis.

I’m proud of myself for having the courage to change and I have to admit, I love the results. I am looking forward to when it grows an inch or so as I think I will feel even more comfortable with it but I will keep the layers for a while as the positive comments I am getting have made me think that is a very good idea indeed. As to whether a change is as good as a rest, I will have to let you know!
Posted by April J Harris at 6:44 pm