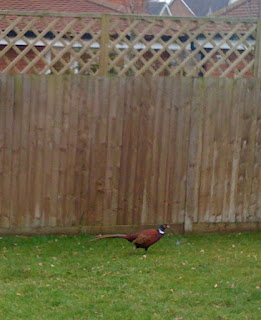 On my way back from the appointment with my personal shopper, Sara, on Tuesday, the 21st Century Teenager called me on my mobile phone.

“There’s a pheasant in the garden,” he announced.

I was a bit taken aback. There are quite a few pheasants in the countryside and woods near to us, and I had even seen a pair in the front garden of a house near to us recently. But we have six foot fences round our back garden and gates at the front of our house and pheasants are not notorious for their flying skills. You usually see them running instead, and they are more than a little clumsy. Pheasants also have a reputation for being a bit stupid - I have watched in horror as they have run right into - instead of away from - cars traveling in front of me. The fact that some people find them delicious also makes their existence very risky indeed, causing them to avoid populated areas.

I say to some people because I simply cannot bring myself to eat game. I ate pheasant once. It was cooked by a dear friend of mine - shot by her husband - and was served as something very special indeed. I was horrified as I really like pheasants. I think they are pretty. But I loved my friends and did not want to hurt their feelings. At first I was fine as it looked much like dark chicken meat - although I have to confess it tasted a bit strong. Then my friend said, “Mind the shot though, won’t you. You can break a tooth on it.” It took me a minute to realise shot meant scattered bits of bullet. That was it for me. I cut the rest of my pheasant up in very small pieces and hid it under my vegetables when no one was looking. Poor little birdie!

I was eager to get home to see the visitor to our garden. Worried that I would not believe him if the bird had gone by the time I got home, the 21st Century Teenager set about taking photographs. Luckily the pheasant was still here when I got back - and I was delighted. In the end he stayed with us for over two hours, eating some of the food that had fallen down from the bird feeder. He seemed quite comfortable and was certainly making himself at home, walking up and down our large garden - and even round the corner into the L-shaped bit. So I very slowly and quietly went outside (he pretended to ignore me at this point but I think he knew what I was up to) and put out more food on the ground for him. I had no sooner got inside than he walked over and began to eat it.

He spent some time after that wandering round, enough time in fact that I began to worry he might be unable to leave. But then I looked up from my writing and he was gone - over the fence and away. Perhaps pheasants are better flyers than I thought!
Posted by April J Harris at 8:58 am