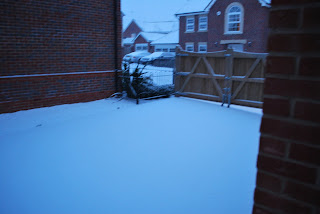 Today was the launch of the new-look 21st Century Housewife website.  Do please check it out at www.21stcenturyhousewife.com.
If you do have a look, you may notice that the Blog and the Recipe of the Week pages do not have as big an archive as before. This will soon be remedied as I gradually re-post the old entries to the new site. There are a couple of other pages that I have not yet moved to this new site, but most of these will return shortly. In the meantime, if you need an old recipe urgently just drop me an email on april@21stcenturyhousewife.com and I will gladly email it to you. It won’t take long till everything is back to normal - well, better than normal really as doesn’t this look so much better than before?!
Remember how on the weekend I said I thought the weather people were getting all upset about nothing when they were going on about the snow? Well I did a bit of a Michael Fish there! (If you are not from England, Michael Fish is a weather forecaster who, the night before a very serious wind storm in 1987, said that there was no reason to be concerned, the weather would not be that bad. There were tornados.) We have only had about two inches of snow here, but lots of other places in the UK had a lot more. In fact, apparently it is the most snow we have had since 1991. You can see what we woke up to this morning in the photograph above, taken from the front door before we opened the gates this morning. Our cars are further up the drive so you cannot see them in the photograph, but they were covered with snow.

Of course, we don’t cope very well with snow here in the UK, and even the snow we have here in the South East has caused mostly everything to grind to a halt. Schools are closed, the Ministry of Transport have recommended the cancellation of all but essential journeys and most buses and trains are not running. The good side of this is that we have had a Snow Day! The 21st Century Husband is working from home, the 21st Century Teenager’s school is closed and all my appointments have been cancelled. I love snow days; it’s so cosy having everyone home.

I’m not sure what will happen tomorrow as in some places the snow is still falling. Perhaps we’ll have another snow day. I think a lot of people are praying for that - especially the kids!
Posted by April J Harris at 6:31 pm