More Than Just a Painting 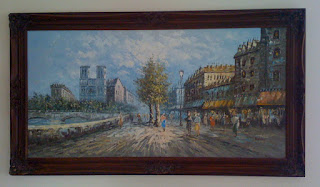 Over the years we have collected quite a few paintings, prints and works of art, but it all started with this original acrylic painting purchased at an art sale in 1989. We did not deliberately buy this one as the start of a collection, it was just something we both liked. At the time it was almost prohibitively expensive. We were just starting out and it cost £60. Which brings me to an interesting story.

Back in 1989 when I met my husband to be, months before we saw this painting at the Sunday afternoon art sale, I was living in a shared flat in North London. He lived in a large two bedroom flat in South London, which he owned, but which was very expensive to maintain on his own. Up until a few months before we met, he had a lodger living with him, but the lodger had left and things were getting tight. Meanwhile, an old platonic friend of the 21st Century Husband-to-be was moving to London and her parents, who held him in high regard, had the bright idea that lodging with him might be the safest thing.

By this time, we had been dating for few weeks and it had been love at first sight as far as I was concerned, so this did not seem at all like the brightest idea to me. The idea of another woman living with my beloved horrified me. Interestingly, he had not actually said he was going to embrace this bright idea, he only informed me of it, but I did not think about that at the time. I thought only of how I could prevent it from happening.

Now the 21st Century Husband-to-be was in a very sticky situation at this point. On one hand a lodger would be an easy way to remedy a tight economic situation. But on the other, it could make our lives seriously difficult. It seemed far too early to talk about moving in together as we had only been dating for a few weeks. He did not want to scare me away. Of course, being a man, he discussed none of this with me.

Meanwhile, I was determined to do anything I could to make sure that the other young lady did not become the next lodger. However I was also conscious of the short time we had been together, and I had no wish to push this wonderful man I had just met away. And how on earth could I suggest that we move in together, as appealing as this idea was to me? For heaven’s sake, it was his flat and he had not asked me to, although I had to admit, it had been a long time since I had spent more than a night or two in my own flat.

Luckily, I am nothing if not creative - and I refuse to hear the word devious in place of creative here because my intentions were entirely honourable! It occurred to me that at this point (and it was to be the only point in our entire relationship this was the case) I was earning more than my wonderful new boyfriend. And if someone else could afford to pay him rent, well then so could I! After all, I was only required to give a week’s notice of my intention to leave my shared flat. And so over a pub lunch one rainy London afternoon, I proposed the business arrangement that shocked our friends and families, but pleased us both no end. I would move into my boyfriend’s apartment and give him the money he would have received in rent towards the flat expenses. It was to be a business arrangement, nothing more - at least not for the moment.

Thank goodness, he agreed instantly. I moved in the following week - just a little over a month since we had met - and paid £60 per week towards the expenses of running the flat - my “rent” as he liked to joke. Head over heels in love, I found this little joke quite funny for quite a long time, but after a few months, it began to worry me a bit. What must people think? By this time we were very much an item, and anyway, I was contributing a lot more than just the £60 as basically we were sharing everything. That was right around the time we found ourselves wandering round the art sale one Sunday afternoon.

We had actually been on our way to Homebase, a hardware/do-it- yourself store, when we saw the sign for the art sale. So it was quite a spontaneous decision to go in. Just as we walked through the door, we saw the painting propped against the wall, and both fell in love with it.

We had been to Paris together a few weeks before, and although we knew that the painting was not an accurate depiction of the City of Light (the boulevards on the banks of the Seine near the Notre Dame are just not that wide), something about it captivated us. But how to afford it? Even on my salary that was a lot of money. Suddenly I had an idea.

I offered to purchase the painting in lieu of my “rent” for that week and this offer was accepted. As we happily carried our painting back to the car, the conversation opened up about how the “rent” thing was making us both uncomfortable, and we made plans to open a joint bank account.

The rest, as they say, is history. So although it is “just a painting” painted by an artist who is still to this day unknown, it means an awful lot to us. Today, in it hangs in the kitchen - a huge room that is the heart of our home - and every time I look at it it reminds me not only of one of my favourite cities in the world, but also of all the wonderful times our family has had together over last twenty years.
Posted by April J Harris at 11:54 am