A Huge Victory Over Clutter 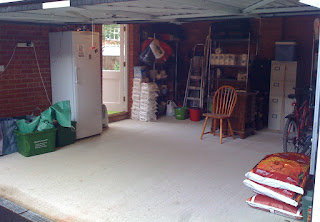 “Three Rules of Work: Out of clutter find simplicity; From discord find harmony; In the middle of difficulty lies opportunity.” Albert Einstein

Although I promised to reveal more about my adventures in the shoe department in the iconic London store, Harrods, in my next blog entry, I’m way too excited about what we did over the weekend. So, as hard as it is, I’ll just have to put off talking about new shoes till tomorrow one more time. This is where I have to stress that I am really not as shallow as this makes me sound - honest!!

Those of you who read this blog regularly will know about my on-going battle with the study in our house (see blog entries from 11th February and 23rd April) and my what feels like futile attempts to turn it into a room that is actually useable, as opposed to a place that is overwhelmed with stuff. Well I’m sorry to report I cannot put a picture of the “new and improved study” up yet but I can report on a small victory over clutter that was won this weekend by my family and I. You see, this weekend we attacked the garage.

The picture you see above is definitely the “after” photo. I’m going to leave it to you to imagine the before. You certainly could not walk without keeping a very sharp eye, and there was not very much floor space visible at all. There were boxes everywhere, and a layer of builder’s dust on the floor that we had never managed to shift - after moving in only two weeks after returning from Canada after my Dad’s death, and two weeks before another visit to Canada for what would be our last Christmas with my Mom. I was so distraught when we moved that I instructed the builders to put anything I did not know what to do with in the garage. And as it turns out, there was a whole heck of a lot I did not know what to do with! In fact, the garage became an almost scary place, with so much clutter I used to wonder what might be lurking behind (or in, or under) it.

It was my husband who announced he was going to attack the garage - and my son and I who very reluctantly agreed to accompany him into battle. But once we got started, it was actually very therapeutic. The sunny weather meant we could put everything out on the back lawn - and sorting through things in the sunshine is never that bad. Yes, it was dusty, and we all sneezed a lot. And God bless my husband, who single handedly swept and washed the two inches of builder’s dust off the floor.

Two carloads (station wagon sized car loads!) of things to the dump later, we started to put the things we really wanted back in the now clean garage. We dusted and washed everything down before we put it back, and it seemed like we were washing away some of sadness from the difficult times around when we moved. The whole garage felt lighter when we finished, and so did our hearts.

Today when I went into the garage to fetch something, for the first time I did not run in and out, rushing away from the things - physical and metaphysical - that I worried were hiding in the corners. Although we could pare down even further, the garage is clean, and I know exactly what is in there and where it is.

I feel like we have taken a huge step towards settling into our lovely “new” home (it’s now 18 months since we moved in!), and I feel encouraged to carry on the efforts we started in the garage actually in our house. The clutter monster in the study had better watch out!
Posted by April J Harris at 11:20 pm