The Perils of Garden Design 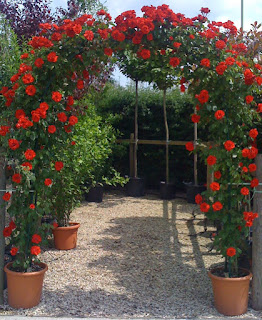 It was the rose arbor that got us started. We went along to The Big Plant Nursery in Twyford, near Reading, last week. We bought several plants from them last year, gorgeous nearly fully grown specimens that fit right into a garden, making it look established from the beginning. We were looking for ideas for our garden which at the moment still looks for the most part like a great expanse of grass, despite our attempts to populate it with plants.

This is the biggest garden we have ever had - a huge backwards L-shape that wraps itself around our house with a single long rectangular planted area along the long side of the bottom of the L at the side of the house. Aside from that and a few trees, there isn’t much else there except some grass - a lot of grass. In our last house, my friend S helped me to design our garden and we dug it out ourselves the summer her husband was in the Gulf with the armed forces. I loved that garden, and brought as much of it as I could with me to this house. Unfortunately, due to the circumstances which arose around the time of our move, most of the plants just got plonked in the aforementioned rectangular bed without much thought, where they have survived quite nicely, if not as stylishly as I would have liked. I added a few plants here and there last year, but without much effect.

Nearly two years after arriving here, I figured it was time we did something about the garden and hoped I could figure out how to do it myself. (S lives over 150 miles away.) But the sheer amount of work involved, combined with the fact that none of us in this family is very good at, or has the lower back strength for, digging was causing me to doubt the wisdom of that idea. And then I saw the rose arbor - instant, finished, stunningly gorgeous and just what I dreamed of. Unsure where in our garden to put it, I did not actually buy it, just wandered out of the nursery dreaming about it. Then by a stroke of serendipity, just opposite me I saw a sign for a garden design/landscaping company. I looked at my husband, he looked at me, and before we knew it we were in their offices talking about our garden and rose arbors. Which brings me rather neatly to this morning, when their director visited so he could give us a quote.

He listened to my ideas (myriad, dreamy and kind of impractical) and translated them into possibilities that are do-able. Sadly, the rose arbor is out. His exact words were, “I’m not sure exactly where in this garden an arbor would make sense” which I’m sure translates to “What the heck were you thinking?” in garden design speak, but he was very nice about it. He agreed to give me three quotes, separating the garden into sections, so we can do as much or as little as we would like. He was also happy just to dig the beds and let me get on with the planting which was exactly what I wanted. Sounded great. I walked him back to his car, shook his hand, turned and grabbed the front door knob. It didn’t budge. My son had gone to school and locked the door while we were outside. None of the other doors or windows were open.

So there I was, cheeks bright red, standing in the driveway with the chap from the design company. My phone was inside. His offer of the use of his telephone was unfortunately no help at all as I do not actually know my son’s mobile phone number - it’s in my mobile phone memory filed under his name. (Note to self, memorise son’s phone number.) Thankfully the culprit was just up the road at school, so I proceeded to walk up to find him, having now bid farewell to the witness of my embarrassment. Thankfully he had had the good grace not to laugh. I mean, it was kind of funny.

It was a lucky thing for me that when I arrived at the school my son was standing outside, although perhaps not for him as his friends witnessed his very frazzled mum arriving to retrieve the very keys that had locked her out. “Do you realise how embarrassing that was?” I queried. “I know I always tell you to lock the door, but I was home!” To be fair, he did look a bit chagrined, but I could tell he was trying very hard not to laugh.

In the end, there was no harm done (except perhaps to my image), and I’m safely inside again now. Apparently the quote for the garden will be with me in two or three days. I’m hoping that by then I’ll be feeling slightly less embarrassed by this morning’s events!
Posted by April J Harris at 11:15 am