Another Day and Night in the Big Apple 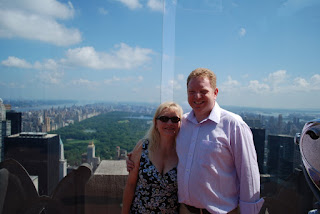 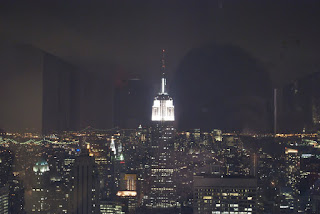 We had another day left on our Grey Line “hop on hop off” bus tour ticket today. As well as the “downtown loop” and the Brooklyn tour we had done yesterday, our ticket also included an “uptown loop”, all round Central Park and up into Harlem. We were excited to take this tour as we had never really been much beyond the top of 5th Avenue and Central Park South before.

We also wanted to get to the “The Top of the Rock” - the observation platforms at the top of Rockefeller Center. The other thing I really wanted to do was to see the filming of NBC’s “Today Show” at the Rockefeller Center studios. For years, the Today show has been filmed both outside and inside - and a crowd gathers every morning without fail to watch and participate.

We had a later start than planned, so headed straight to the NBC studio. They have roped off areas for you to stand in, and as it was a bit later some of the crowd had dispersed so we headed straight to the front. There was a television broadcasting what was going on inside (and we had seen the studios through the window the day before). Later on, Al Roker, their weatherman and feature reporter came outside to film a spot. He asked the lady next to me a trivia question about weather, and my husband and I were part of the shot. (I was very glad he did not ask me the question as I had no idea of the answer!) It was very cool to be tiny part of the action on a show I watched for years growing up, and that I still enjoy watching when in the States.

From there we headed to the ticket office for Top of the Rock. We went up the Empire State building on our first visit to New York about five years ago, so we wanted to get another bird’s eye perspective of this famous city. You can get what they call “Sunrise/Sunset” tickets for Top of the Rock, so you can go up twice in one day and see the city by day and night, so we decided to do that. The queues were not too bad, and before we knew it we found ourselves in the elevator on our way up sixty-seven floors. They project a film on to the ceiling of the elevator and it is amazing - you can see the elevator shaft which is all lit up, but the movie distracts you and frankly it is the best elevator ride I have ever had - and I say that as someone who is not a fan of elevators!) As we expected, the view was stunning - and as there are several floors of both indoor and outdoor viewing platforms, you can see New York from all sides - even as far out as the Statue of Liberty. Amazing. The elevator ride down does not disappoint either, with another film on the ceiling and the elevator shaft all lit up as you go down it.

From here we headed the corner of 53rd and 7th Avenues, where we hopped on the Grey Line tour and headed uptown. What a gorgeous side of New York “uptown” is. Central Park is just incredible - an 843 acre green paradise in the center of one of the busiest cities in the world. All round it are beautiful apartments, beautiful museums (which I still have not managed to get inside despite four visits to this wonderful city!), lovely churches and more. We liked it so much we resolved to stay in a hotel “uptown” next time we visit - or at the very least spend more time there!

The tour even takes you up in to Harlem - a place I had been brought up to fear - but which is actually quite fascinating. It was great to see the iconic Apollo Theatre.

As the bus travelled back towards 5th Avenue, it was getting to mid- afternoon. It was incredibly hot, and we still had not had lunch. As I wanted to taste the Waldorf Salad at Sarabeth’s Restaurant on the fifth floor of Lord & Taylor again, we hopped off the bus near there. A short walk took us to our destination and we enjoyed a super lunch and some great shopping.

In the evening, we had a delicious meal at Nicos, the restaurant in our hotel (The Muse on West 46th Street). Afterwards we headed back to “The Rock” (Rockefeller Centre) and went up to the top once more time. New York truly is gorgeous at night, and the view was breathtaking. It is well worth getting the Sunrise/Sunset ticket to experience this incredible city at both ends of the day.

As we wandered back to the hotel we were all sorry to be leaving New York the next day, but resolved to fit as much as possible into the few hours we had before our evening flight. I have already started my list of things to do the next time we return to this incredible city!
Posted by April J Harris at 8:41 am