We flew out of an overcast sky and landed at Heathrow on Saturday morning. It was, rather unsurprisingly, raining. I don’t know why I am always so tired after New York and Toronto flights - perhaps it is because it is such a short flight there is little time to sleep. (Whoever would have thought that I - the girl who never set foot on a plane until she was eleven years old - would ever refer to a six hour flight as “short”?!) I find myself much less tired after flights from the West Coast of North America. It is always easier for me - not just the day we land, but also in the days that follow. As it is, it is only just today I am beginning to feel my body is in the same time zone as I am.

I had to hit the ground running as my son was due in London Sunday afternoon for his week long residential drama workshop West End Stage. This meant I had to get the washer running immediately we arrived home in order to turn his clothes round. It made for a very busy Saturday, and we did not actually get to bed until nearly ten o’clock. (Although I have to confess to a brief nap between four and five in the afternoon!)

It’s really quiet around here with our son away. I’m getting a lot more writing done, and it is great to have time with my husband, but I do miss him. I think it is made a bit worse by the sense of bittersweet regret I feel as I realize that it won’t be long till our son is leaving home to make his own life. It’s the sort of thing you have to look at as a new beginning - because without the right attitude that kind of life change could be very upsetting indeed. Let’s just say no one is allowed to use the words “empty” and “nest” in the same sentence around here this week!

I’ve been going through our holiday photos and we sure do have some great memories from our time away. I think it may be one of the best holidays we have had. Here’s a couple of photos I have not posted before. 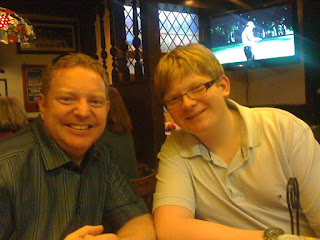 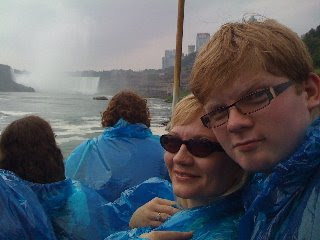 The one on the top is of my husband and son at The Bull and Finch pub in Boston, otherwise known as Cheers. We ended up going there twice we liked the atmosphere and the food so much. The photo below the first one is of our son and I on the Maid of the Mist, the boat that takes you right up close to the American Falls, and right into the horseshoe of the Canadian Falls. It’s awe-inspiring and so beautiful. It’s also incredibly damp. Despite the very fashionable complementary blue raincoats, you get totally and completely soaked.

It’s always nice to come home - and I am grateful to have such a lovely home to come home to. It’s been a nice week so far. Yesterday I met my husband in London for dinner after he finished work. It was nice to go out just the two of us. In America, they call it a “date night” even if you are married - and based on how much we enjoyed last night, I highly recommend incorporating “date nights” into your marriage. Of course we love going out as a family - and we were in a bit of trouble with our son for going to one of his favourite restaurants - Piccolino in Heddon Street - but it is our favourite too so we decided to risk it. As usual, it was wonderful. Funnily enough, a couple from Toronto and their little girl were sitting at the table beside us. We got to talking and they couldn’t believe I was originally from Kitchener, only 60 miles from where they live. It really is a small world after all.
Posted by April J Harris at 2:41 pm