Not The Brightest of Birds 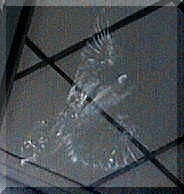 Anyway, back to the thump. Being awoken by that kind of noise is never good, but it was even worse for the thing that caused it. I have to admit I immediately suspected what the source of the noise was, but only because I have heard it so many times before. It seems that our house, newly built eighteen months ago, is on some ancient pigeon flight path. One of the first times I came to look at the house under construction I noticed a pigeon shaped mark on the dining room window. The builders no sooner cleaned it off that another one appeared. Since we moved in I have lost count of the number of pigeons I have watched hit the window and land on the ground, dazed and confused, only to stumble away with a puzzled look on their faces. I feel quite sorry for them actually.

The oddest thing about it is that although a lot of the back of our house is glass, it is only ever the dining room window that gets hit. Stranger still is the fact that in a window with three large panes of glass, it is always the same one that gets hit, in virtually the same place! And even stranger still, it is only ever the pigeons that hit it. It’s like the news on the bird grapevine of our house being built somehow escaped the pigeons. Or maybe they upset the other birds so no one told them about it. Whatever the cause, at least once a month (usually just after the window cleaner has been) a large, perfectly shaped pigeon print appears on the window. The strike this morning was actually a first in that this is the only time we have had two pigeon shaped marks on the windows at the same time. I had always left the marks there to hopefully warn other birds off, but I guess not only can they not see the window, they cannot see the pigeon marks either.

Luckily none of the pigeons has actually done themselves any real harm (except possibly one that was later run over in the road - I suspect he was so dazed he wandered out in front of a car). This is a big relief to me as I am not very good at all with birds, and dead or injured ones render me virtually helpless with fear. I’ve even been on the internet trying to find ways of stopping the collisions from happening - sadly without much success. One website www.flap.org (no I’m not joking, that really is the URL!) had all sorts of suggestions, but sadly they all involved putting stickers all over your windows or putting nets up outside. They even suggested whitewashing the windows - not something I am going to be doing anytime soon! (I do need to thank them for their photograph of a bird strike which I have borrowed for this post though as I could not manage to get a good photo of the one on our window. )

According to flap.org, unless you almost totally cover or obscure your window, there is a pretty good chance birds will hit it. Sadly, this does not bode at all well for our local pigeon population as I’m certainly not bird lover enough to go to those lengths. So if you see a load of pigeons wandering round looking like they have really bad headaches, chances are you are not very far from my house - which is clearly right in the middle of one of Berkshire’s premier pigeon flight paths!
Posted by April J Harris at 4:32 pm