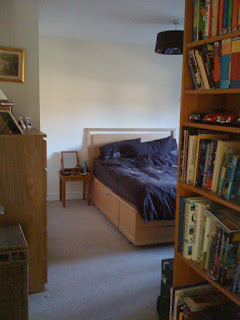 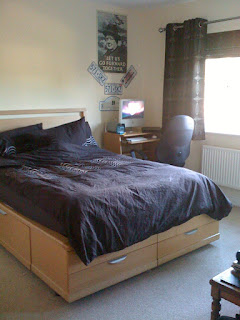 After two days of attempting to develop and work to a schedule, I must admit I am finding it a bit of a challenge. I’m not sure if it is because:-
a) I am one of those people who works better under pressure and prefers to hurtle from one task to the other, or
b) it is impossible to actually schedule a housewife’s life because it is utterly unpredictable.

I prefer to think it is the latter, but that is not going to make me give up. I plan to continue with the experiment and hopefully develop a schedule that works - for those who want one.

In the interim, I’ve been pipped to the organisation post by my son, who, encouraged by a rather untimely meltdown by the 21st Century Housewife, took it on himself to houseclean his bedroom and his study, all within a two day period.

His rooms really had been an absolute disaster area. I got very upset about it when I saw a spider rushing from one end of his bedroom to the other late last week, making a bit of a trail in some dust as he went, so I did have a bit of a rant about it. You see, when I was a young person (this was the point at which my son’s eyes began to roll, which did nothing for my state of mind) not only did I have only one room and no ensuite bathroom but my bedroom was a good deal smaller than the one he has. I feel that surely if my son is lucky enough to have not just one, but two rooms and an en-suite all to himself, he ought to keep them tidy. I shared this information with him during my rant - succinctly, if not calmly. I also shared the story of how I remember visiting the home of a girl I went to school with (she was not a friend, this was one of those school open-house things) and not only did she have a bedroom with an en-suite bathroom, it had stacks of beautiful fluffy towels sitting on shelves. The ten year old me thought this was the epitome of luxury and glamour, but that was before I saw her parent’s bedroom complete with fireplace. (Okay, I was being nosy, but my story - and I’m sticking to it - is that I got lost on the way to the bathroom. Hey, the house was huge!) It was my first nearly adult experience of coveting (frankly, I still find neatly stacked multi-coloured towels unbelievably appealing and dream of devoting lots of cupboards just to them). Anyway, back to the being pipped to the post thing.

Over the course of last weekend, my wonderful son cleaned both his rooms from floor to ceiling, even moving the furniture and clearing out most of the cupboards (results above). I was beside myself with joy.

I was, that is, until I realised that this did cast me in a very bad light indeed, as suddenly the rooms I am attempting to sort out, in particular our study downstairs (see blog entries from 11th February and 23rd April ) still look a bit of a disaster zone, despite several hours of work - and copious amounts of paper-shredding. So I’m frantically attempting to live up to the wonderful example I have been set - and hoping that within the next couple of days at least one of the rooms I am working on will look as good as the one above!

Wish me luck (and I’ll keep you posted on the schedule thing)!
Posted by April J Harris at 10:27 pm