A Great Day in London 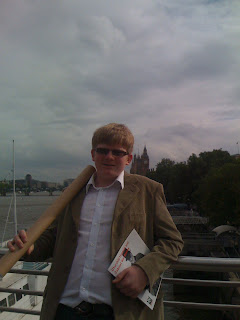 Alex and I had a wonderful day in London today. We took the train from Reading about half past twelve, and headed straight for Westminster with a view to going to the Cabinet War Rooms. I could not believe my eyes when we got off the tube at Westminster. The station itself was so improved, with the lovely double doors on and off the tube that make such a difference. The station was totally revamped and modern. But then, I suddenly realised, the last time I took the tube to Westminster was easily fifteen years ago, maybe twenty. Improvements are bound to have been made!

At Alex’s request, we left the station by Exit 3, which is where you can see the Parliament Buildings. I am always staggered by the beauty of the Palace of Westminster, and don’t get me started on Big Ben! It was the animated picture of Big Ben, with Peter Pan flying over it in the Disney film of the same name, that made me first start to think that I might want to live in England when I was about six years old. I told Alex today, if he ever thinks dreams can’t come true, to just come into London and look at Big Ben and know that they most certainly can, and do.

On our way to the Cabinet War Rooms, we of course walked past St Margaret’s Church and Westminster Abbey. I decided that Alex really needed to visit the Abbey as he had never been there before. So we headed up to the entrance, which is down the side instead of at the front as it used to be. I was shocked to find that admission to the Abbey costs £12 for an adult (about $25) and £9 for a person under 17 (about $19) but I duly paid up (cash only!) and we went in. I can’t say the Abbey is an uplifting place, nor is it as beautiful as St Paul’s Cathedral, but it is a place you need to see, if only for all the incredible graves there. To stand at the foot of the graves of Kings and Queens is so humbling, and to look at graves of people who died in years like 1100, simply blows you away. This faith I hold so dear has been shared by so many people for literally centuries. I could not believe that I could look at the graves of Edward the Confessor, Richard the II, Mary Queen of Scots and so many others. At one point, the coronation chair was just above us, and I had never realised that the throne Queen Elizabeth sat on was the seat that every monarch since the 1300’s has sat on for their coronation. Good grief! Suddenly time stands still and you feel very insignificant. Then there are the graves of the poets and statesmen, from Lord Byron and Lewis Carroll to William Wilberforce. Wow.

By this time we were very hungry – and as it was nearly 2.30pm this was no surprise! So on leaving the Abbey we headed in the wrong direction down Whitehall towards Trafalgar Square in pursuit of something to eat. It’s an interesting walk down Whitehall, past Downing Street, the Palace of Whitehall itself and the Cenotaph. Finally, just on the corner of Trafalgar Square, we stumbled on a Prêt a Manger shop and went in for some delicious sandwiches. You can always count on Prêt a Manger for fresh, delicious food, fast. We really enjoyed our lunch.

We then headed back towards the Parliament Buildings and followed the signs to the Cabinet War Rooms, opposite St James’ Park. I must say, they have really made some amazing improvements since my last visit over twenty years ago. It is much more interactive and you really do feel you are stepping back in time. Alex and I loved every minute, and were shocked to find out that we spent nearly three hours exploring the incredible bunker from where Churchill’s War Cabinet made the decisions that won the Second World War and preserved freedom for the generations to come. So many of the rooms are exactly as they were left, right down to an envelope containing a soldier’s sugar rations from 1940, which was found hidden at the back of a drawer! It is an incredible place to visit and I highly recommend it.

Alex and I then walked up past Horse Guards Parade and along the Embankment, finally getting back on the tube at Waterloo and heading to Covent Garden. It’s always fascinating there, with something different happening every time. We wandered round for a bit, enjoying the atmosphere and then found a Pizza Express for dinner. We had a really lovely meal there. Despite the name, it’s a very relaxing place to have a meal. They are a chain of restaurants of course, but the quality is very consistent and I have never been disappointed.

Then we walked down to Leicester Square tube station and headed back to Paddington Station. What a super day!
Posted by April J Harris at 10:22 pm