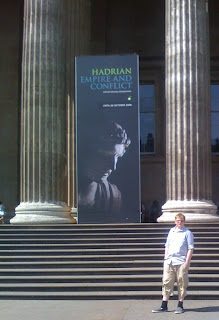 Today we decided to go and see the Hadrian “Empire and Conflict” exhibit at The British Museum. You can see Alex in front of the museum, with the poster advertising the exhibit, in the photo above. It was a bit of a strange trip into London actually, beginning with being delayed when our train broke down. We sat somewhere outside Paddington for almost half an hour while the repaired it. I was just glad they managed to fix the problem as I didn’t fancy a walk down the tracks in the heat! We kind of limped into the station in the end, but low and behold, the train was not taken out of service!

The Hadrian exhibit was very good, but it was very long and drawn out. Even with the audio guide we began to feel a bit like we wanted it to be finished a good twenty minutes before the end of it. Sadly, for someone who so influenced the world even up to this day, Hadrian appears to have been a very flawed human being. Some of his personal habits made me deeply uncomfortable – particularly his long term affair with a very young boy. And the way that the exhibit dwells on the relationship between diagonal lines in the earlobes and a 77% likelihood of developing coronary heart disease (possibly what Hadrian, who did have very distinctive diagonal lines in his earlobes, died of), is sure to cause a rush of history buffs running to their doctors to be checked out. In short, it was kind of depressing (and no, neither Alex nor I have diagonal creases in our earlobes – we checked). It’s a shame because some of the artefacts were simply stunning, but the exhibit wasn’t laid out in a way that made it very enjoyable. After finally getting out of the Hadrian exhibit, we made our way to “The American Scene” print display, but that was depressing too. It was time to get outside in the sunshine, so we said goodbye to the museum and headed to Oxford Street.

We had no luck at all shopping, although we spent a pleasant couple of hours wandering round Regent Street and Carnaby Street, including a foray into Liberty's – a veritable treasure trove of virtually everything anyone could possibly want – at a price of course! It was very hot though, and we found it quite tiring, so we headed to Piccolino on Heddon Street for an early dinner. We had been there once before – in April believe it or not – and the waiter remembered us! (This is despite the fact that we were a party of four instead of two that time.) After welcoming us back, our waiter recommended the Aubergine Paramigiana. I ordered it, and I am very glad I did. It was exquisite. Alex had the spaghetti carbonara, which was served with a poached egg on top. He said it was divine. We also treated ourselves to desserts – Alex had a chocolate fudge concoction that was amazing and I had a simple homemade white peach sorbet which was so refreshing and delicious. As we were travelling by train, I also had a couple glasses of a very nice Sauvignon Blanc. And herein lies the rub. For the first time in my life I did not check the bill in detail. So I missed the fact that service was included. Recently, having been informed by several waiters and waitresses that they almost never see the tips left via credit card, I have made a habit of tipping in cash, into the hands of our server. So, when the waiter shook Alex hand as we left, I pressed his 15% tip into his hands, not realising I had already tipped him via the bill! To be fair, he did say “oh, no, no, you don’t need to do that”, but I took that to mean “you shouldn’t have, but carry on” and I could hardly have taken it back, now could I? As a result I believe I may have tipped higher than ever before in my personal dining out history – about 28% I reckon. How embarrassing. Oh well, the service was excellent, and I’m sure we’ll get even better service next time!

The really disappointing thing was that I discovered that sitting outside, enjoying the café style atmosphere, is not what it once was. Unfortunately, all the smokers now sit outside, and they are allowed to smoke in the dining area outside the restaurant, despite the fact that smoking inside is prohibited by law. I just can’t understand that. There should be a separate area for smokers outside really. At one point, people at all the tables around us were smoking, so it was just like being trapped in a smoky cloud despite the fact we were sitting in the “fresh” air. Yuk.

The train ride home was even stranger, with a huge crowd of folks rushing onto the train heading for Great Barr, which stopped at Slough and Reading. It was so crowded we had to stand. Thankfully we managed to find a place near a window, or it would have been unbearable in the heat. The ironic part was the train company had put a sign saying “please close the windows to save energy and improve everyone’s travel experience”. If we had shut the windows we would have been roasted alive. I can see it in the winter, but in the summer it was hysterical. The man beside me asked if I’d like him to close the window, and as we faced each other, with sweat evident on our brows, I laughed and said “I’m good with the window open thanks”! This sign was just next to the one saying “Beware, some trains are longer than the platforms in many stations. Be sure to check before you alight that your carriage is in the station”. What??? They left out the part about – “And if you are not in the station, run like h**l through the train to get to a carriage before you end up missing your stop!” Very strange.

It’s a long ride, standing all the way from London to Reading. It’s a good half hour run and the train goes at about 125 miles an hour so it’s fairly hard to stay upright. It’s a bit jarring when you think we paid for the privilege as well. Let’s just say I was very ready for a nice cold drink when we finally did get home! But all in all, Alex and I had a really fun day together and I’m grateful for every minute of it.
Posted by April J Harris at 10:49 pm