The Weekend Again and a Great Start to the Week 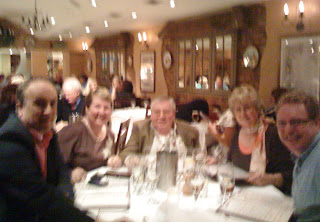 Friday night was my in-laws’ anniversary so the 21st Century Husband and I met at Bromley South Station (he drove from work, I took the train from home) and went to visit them. My mother-in-law didn’t know we were coming so was very surprised and pleased. My sister and brother-in-law came too, and we all went out for a lovely meal at Zi Theresa in Elmer’s End. That’s everyone (except me, I took the picture!) in the photo at left. I’ve talked about Zi Theresa in my blog before. It’s a really good Italian restaurant with friendly staff and wonderful food. I highly recommend their crab and mango salad to start, it’s delicious, although I do wish there were not quite as many pieces of shell in it (I got three in my portion). My main course of veal with olives was beautifully cooked and seasoned. Everyone enjoyed their meals and the company was super too. We had a great evening. 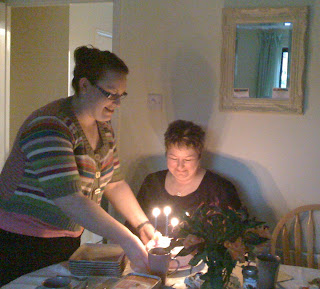 Saturday we went to Oxford to visit my cousins Brenda, Jamie and Laura. My cousin Heather was there. She is the only one of the cousins still here visiting from Canada. I’ve so enjoyed the last few weeks with some of my family being over. We had a really fun evening and enjoyed celebrating Heather’s birthday. That’s her at left with Laura. It was so nice to get together again.

It’s wonderful actually as from where we live now we can drive to Oxford on the back roads through the Chilterns and it only takes about half an hour to forty minutes. I love the drive as well, especially going over the old toll bridge at Pangbourne into Whitchurch. I found a really brilliant website done by Woodlands Junior School with some photographs of the bridge and interesting facts about Pangbourne and Whitchurch. To see it, click here. It’s an excellent site, especially considering it was done by a junior school. Well done to Woodlands!

So it was a really nice weekend actually, although Sunday was a bit stressful. We decided to bring in some of the boxes from the garage that we have not unpacked yet from our move almost a year ago. Well, the very idea we still have boxes, compounded by the fact that the garage is a mess and very dusty and exacerbated by all the memories emptying boxes pulls up in me making me very emotional, led to a rather stressful afternoon. Although there were some fantastic moments, including finding an audio tape of Guy’s Grandad Pip’s voice and a video tape made from a cine film which included moving pictures of my Grandma Killingback – who died before I was born – and also of me aged three dressed in one of my favourite dresses ever (to this day!) made by my wonderful Aunt Irene. There was also footage of me attempting escape from a playpen which was quite funny as my legs were just that little bit too short! The trouble was we had a choir programme on in the background and suddenly Aled Jones was singing The Unicorn Song by the Irish Rovers with some very talented children. Dad used to sing that song to me when he was carrying me to bed when I was very little indeed (around the time the films I just mentioned were taken actually) and also to Alex at the same age. I listened as far as “There were green alligators…” and fell completely to pieces. It was the first time I have really been able to cry properly since Mom and Dad passed away. I was so busy coping most of the time I just swallowed my tears which is, I can assure you from bitter experience, extremely unhealthy. Sadly it didn’t make for the best Sunday evening, but hey, I’m human and I think I was due a little cry after being brave for all this time.

Thankfully Monday evening was a lot more fun. The Reading Comedy Festival is on this week and next so we headed to The Hexagon to see The Reduced Shakespeare Company perform “The Bible”. We’ve seen them perform “The Complete Works of Shakespeare (abridged)” and “Completely Hollywood” (also abridged) and roared with laughter. However, I was a bit nervous about “The Bible” as we are Christians, but I need not have been. As usual, they were side achingly funny and although I’m sure some might take offense at their portrayal of the Word of God, we took none at all as we realised they were only having fun – and frankly their Biblical knowledge would put many people’s to shame! It was a super show and a really fun evening. I even escaped having to cook as we grabbed a quick dinner at Ask Restaurant round the corner from Broad Street Mall. I had a delicious pizza, Guy had a calzone that tasted heavenly (he shared!) and Alex had spaghetti con polpette (that’s meatballs to you and me) which he thoroughly enjoyed. The service was quick and efficient too, just what we needed. It was a great start to the week.
Posted by April J Harris at 10:27 am