Getting into the Christmas Spirit - 23rd December 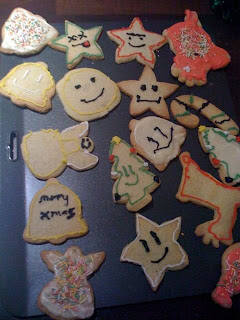 Christmas preparations are in full swing in the 21st Century Household, and we are all really getting into the Christmas spirit. I have to admit, it is still chaos though – I haven’t even begun wrapping presents and the kitchen is a mess after a very pleasant afternoon spent baking and decorating cookies. I was joined in the kitchen by the 21st Century Teenager and we really had a lot of fun.

I say that this Christmas is chaotic, but compared to recent Christmases, things are actually quite calm. In fact, we realised as we baked the cookies that this was the first time we had managed to find time to make cookies at Christmas in a number of years. Both the 21st Century Teenager and I find baking incredibly therapeutic, and this afternoon is definitely one of those days that will stick in my memory for the fun and laughter that we had. It really is worth taking time out to spend time with your kids (or nieces, nephews and/or grandchildren) passing on old recipes and having a laugh together in the kitchen – and not just at Christmas either!

We drove into Pangbourne this morning and it was absolutely heaving with Christmas shoppers, with queues at the butchers, Grey’s cheese shop and the stationery store. The decorations in Pangbourne are very pretty though and it is well worth a look round this historic village this time of year. Luckily we did not need much – I have been fairly organised in terms of food shopping this year – so it was not stressful at all. We also nipped to our local Waitrose (grocery store) just to pick up some very last minute bits and pieces. Thank goodness we got there early as by the time we left there was a traffic jam of half a mile queuing to get into the car park. I think that will be it for the shopping this year!!

I’m really beginning to get excited about Christmas, Boxing Day and especially our trip to New York at New Year to celebrate the 21st Century Teenager’s 16th birthday. Once the 21st Century Husband gets home tonight – hopefully he is working from home tomorrow – it really will be “beginning to feel a lot like Christmas!”
Posted by April J Harris at 2:59 pm