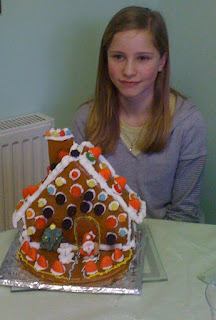 We drove up to Burton on Trent today to see our friends. The 21st Century Teenager went to kindergarten with their eldest daughter and her mum, S, and I became friends through them. The friendship gradually extended to the whole family and we have all been friends for over ten years now. It was so good to catch up with them after such a busy year. We’ve gotten together a few times for coffee since our move south last December but this was the first time we have had a meal together. S made a beautiful lunch of rainbow trout, lemon couscous and salad and also made two lovely desserts, a tiramisu and some ginger and cherry fudge. Her youngest daughter made a fantastic gingerbread house which we also ate. I was horrified that she was going to cut it up, so insisted on taking the photograph above first, but actually in the end it was so delicious I got over my sorrow at its destruction!!

After a very pleasant lunch, we headed off to our hairdresser. We all had appointments so we were there for a couple of hours, but as she is an old friend we all enjoyed the chance to chat. She has been doing our hair (all three of us!) for over ten years. She has a beautiful salon as well, with a television, lots of reading materials and internet access so there was plenty to do for each of us when it was our turn to wait. We all left with our hair beautifully done and feeling very relaxed and Christmassy, having enjoyed cups of tea and mince pies while we were there.

We did not get home till quite late as it takes nearly three hours to get up to the Midlands from here, but we had all enjoyed the day so much we did not mind the drive at all. It is so nice to get together with old friends.
Posted by April J Harris at 5:03 pm